Moscow was accused of a ‘complete lie’ (Picture: Getty/Metro Graphics)

Russia has broken its promise to scale back its attacks on Chernihiv and is continuing to shell the strategically important city, UK defence officials say.

Olexander Lomako, secretary of the Chernihiv city council, said the Russian pledge earlier this week to ‘fundamentally cut back’ attacks had turned out to be ‘a complete lie’.

Ministry of Defence (MoD) officials also say only a ‘limited number’ of units have withdrawn from Kyiv.

That is despite Moscow announcing at talks in Turkey on Tuesday that it would reduce military activity near the capital and Chernihiv.

The smaller city, which is between Kyiv and Belarus, has come under ‘significant Russian shelling and missile strikes’, according to the latest MoD update.

It added that around Kyiv, Russian forces continue to hold positions to the east and west ‘despite the withdrawal of a limited number of units’. 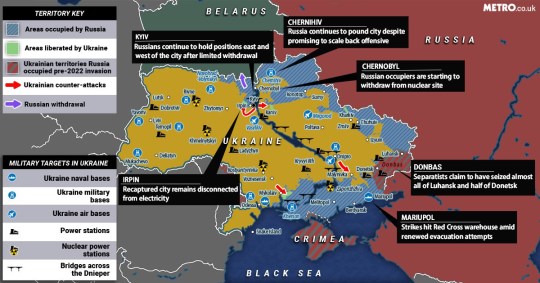 The current state of play in the Russian invasion (Picture: Metro.co.uk)

Analysts believe that means ‘heavy fighting will likely take place in the suburbs of the city in coming days’.

The pounding of the two cities further dented hopes about possible progress in talks aimed at ending the war.

Moscow had not detailed exactly what a reduction in activity would look like, and while the promise initially brought optimism that there was a path towards ending the bloody war, Ukraine’s President and others had cautioned about trusting Russian commitments.

Volodymyr Zelensky reacted with scepticism to Russia’s announcement in Istanbul.

‘We can call those signals that we hear at the negotiations positive,’ he said in his nightly video address to the Ukrainian people. 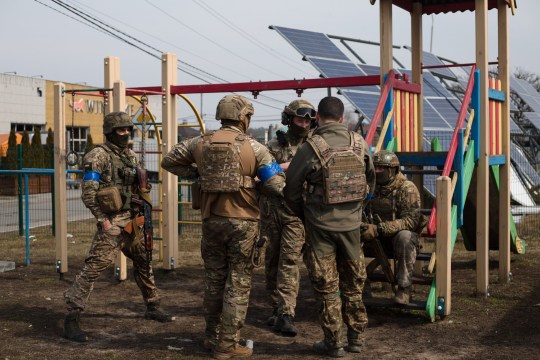 Ukrainian troops on the outskirts of Kyiv on Thursday (Picture: Getty Images) 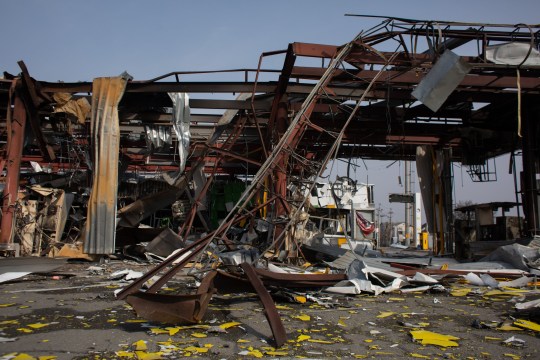 ‘But those signals don’t silence the explosions of Russian shells.’

A regional governor also hit out at Russia.

Viacheslav Chaus said: ‘The so-called reduction of activity in the Chernihiv region was demonstrated by the enemy strikes including air strikes on Nizhyn, and all night long they were shelling Chernihiv.

Oleksandr Pavliuk, head of the Kyiv region military administration, added that Russian shells had targeted residential areas and civilian infrastructure in the Bucha, Brovary and Vyshhorod regions around the capital. 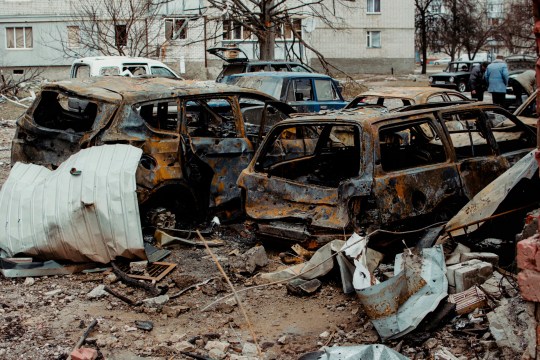 Senior Russian military officials have said twice in recent days that their main goal now is the ‘liberation’ of Donbas, where Moscow-backed rebels have been battling Ukrainian forces since 2014.

Some analysts have suggested the Kremlin’s apparent lowering of its aims and the pledge to reduce activity around Kyiv and Chernihiv may merely reflect the reality on the ground, where troops have become bogged down and taken heavy losses in their bid to seize the capital and other cities.

After Russian pledges to take Ukrainian peace terms to Vladimir Putin’s the country’s deputy defence minister Alexander Fomin had said Moscow would in the meantime ‘fundamentally… cut back military activity in the direction of Kyiv and Chernihiv’ to ‘increase mutual trust and create conditions for further negotiations’.

Talks had been expected to resume on Wednesday, but after what Turkey called ‘meaningful’ progress, the two sides returned home for consultations.


Mr Zelensky warned the world and his own people not to get ahead of themselves.

‘Ukrainians are not naive people,’ he said.

‘Ukrainians have already learned during the 34 days of the invasion and during the past eight years of war in the Donbas that you can trust only concrete results.’

Talks between Ukraine and Russia are set to resume on Friday by video, according to the head of the Ukrainian delegation, David Arakhamia.

The failure of Russian forces to complete the kind of lightning advances envisaged by commanders has led to Western intelligence agencies concluding that Putin is not being given the full picture by his frightened commanders.

Not another fishy tale — a large, dark fish with a dorsal fin was caught on camera swimming…
byBizLifetime
No comments

I spent £3,600 on Christmas decorations and it was worth every penny – I don’t care what people think