Ukraine’s chief of military intelligence has warned Vladimir Putin is planning on splitting the country in two like North and South Korea.

Kyrylo Budanov said Russia could seek to take full control of the eastern region and pit it against the Kyiv-controlled portion.

He said Russian troops could enforce ‘a line of separation between the occupied and unoccupied regions’, similar to the tense stand-off on the Korean peninsula which has been in place since the Second World War.

Mr Budanov added that the Russian presidents knows ‘he can’t swallow the entire country’ so could seek to take control of the portion it borders and already partly controls.

He also predicted that guerrilla warfare by Ukrainians would derail such plans.

The assessment tallies with recent public comments from Moscow’s defence ministry that ‘liberation of the Donbas is the ‘main goal’ of the invasion.

Pro-Kremlin forces have held parts of the area since an armed revolt against the Ukrainian government broke out following a pro-Europe revolution in 2014.


The brutal shelling of Mariupol has continued as Russian forces look to cement control over the east of Ukraine (Picture: Reuters)

Russia responded to the toppling of the pro-Moscow government by annexing the Crimean peninsula which, like the Donbas, has a higher proportion of Russian speakers than the rest of Ukraine.

Mr Budanov said he believes Mr Putin will pull the ‘occupied territories into a single quasi-state structure and pit it against independent Ukraine’.

Last week’s shift in messaging from the Kremlin over the goals for the invasion was seen as an attempt to manage expectations about the outcome of the invasion and a tacit admission that any hopes of swiftly subduing the entire country have failed.

Russia has failed to take control of Kyiv and has sustained heavy losses over the last month, with casualties thought to be close to the death toll sustained during more than nine years of war in Afghanistan already.

Western analysts and governments have cast doubt on the claims, with the Institute for the Study of War saying Moscow is ‘unlikely to have abandoned its efforts to encircle Kyiv’ and is regrouping forces. 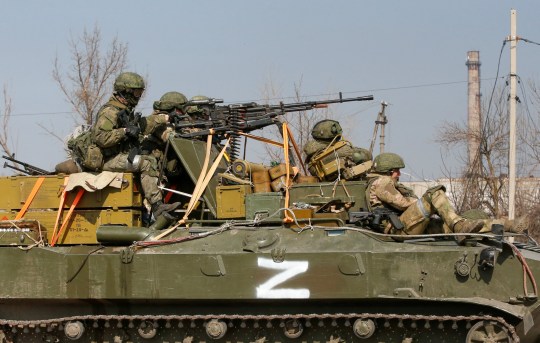 Russian troops have made much slower progress than expected after meeting fierce opposition from Ukrainian forces (Picture: Reuters)

Fighting has continued in the besieged city of Mariupol, the capture of which has become a key goal for Russian forces.

The southern port city stands between occupied territories in Crimea and the Donbas, meaning a land bridge between the two could be established should it fall.

It’s thought troops would then push north to bolster the assault on Kharkiv, the second largest city in Ukraine, the largest in the east and the Soviet-era capital.

The UK’s Ministry of Defence’s latest analysis of the situation on the ground is that Russian forces are still struggling to make significant breakthroughs.

It read: ‘In the last 24 hours there has been no significant change to Russian Forces dispositions in occupied Ukraine.

‘Ongoing logistical shortages have been compounded by a continued lack of momentum and morale amongst the Russian military, and aggressive fighting by the Ukrainians.

‘Russia has gained most ground in the south in the vicinity of Mariupol where heavy fighting continues as Russia attempts to capture the port.’

Table of Contents Hide Is Monday, August 29 a bank holiday?When are the remaining bank holidays in 2022?When…
byBizLifetime
No comments