Joe Biden has said Vladimir Putin ‘cannot remain in power’ during a powerful speech in which he appealed directly to the Russian people, telling them they are not ‘our enemy’.

Building on earlier remarks in which he called Putin a ‘butcher’ and ‘dictator’, the US President evoked memories of the siege of Leningrad and made an impassioned defence of democracy.

Speaking in front of the Royal Castle, a landmark in Warsaw that was badly damaged during Adolf Hitler’s war, he said: ‘A dictator bent on rebuilding an empire will never erase a people’s love for liberty.

‘Brutality will never grind down their will to be free. Ukraine will never be a victory for Russia, for free people refused to live in a world of hopelessness and darkness.

‘We will have a different future, a brighter future, rooted in democracy and principle, hope and light, of decency and dignity, of freedom and possibilities.

‘For God’s sake, this man cannot remain in power.’ 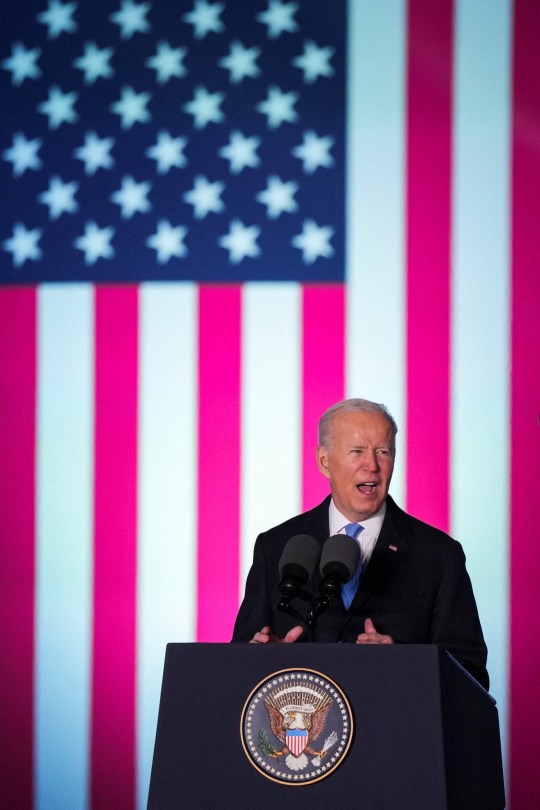 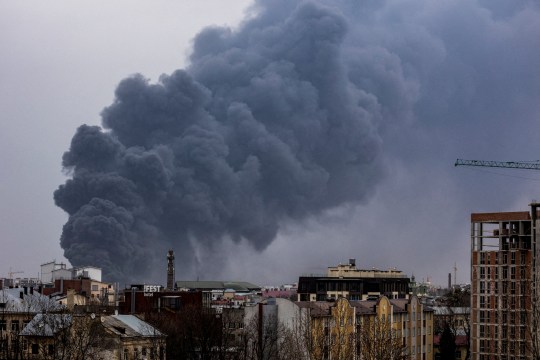 Smoke rises after an airstrike in Lviv (Picture: Reuters) 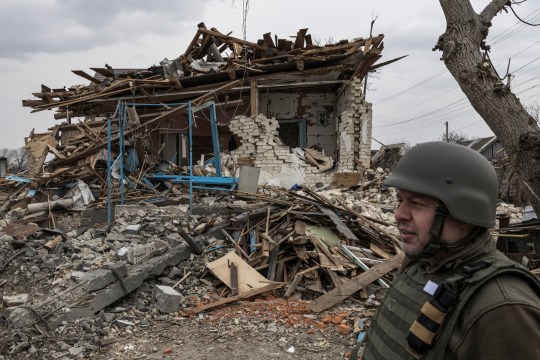 A Ukrainian serviceman stands in front of a destroyed house in the village of Krasylivka outside Kyiv (Picture: Reuters)

Quoting Pope John Paul II, he went on: ‘In this hour, let the words of Pope John Paul burn as brightly today – never, ever give up hope, never doubt, never tire, never become discouraged. Be not afraid.’

‘I refuse to believe that you welcome the killing of innocent children and grandparents or that you accept hospitals, schools, maternity wards – for god’s sake – being pummelled with Russian missiles and bombs. Or cities being surrounded so that civilians cannot flee, supplies cut off in attempts to starve Ukrainians into submission.

‘These are not the actions of a great nation. Of all people, you, the Russian people, as well as all people across Europe, still have the memory of being in a similar situation in the 30s and 40s, the situation of World War Two, still fresh in the mind of many grandparents in the region.

‘Whatever your generation experienced, whether it experienced the siege of Leningrad, whether you heard it from your parents or grandparents, train stations overflowing with terrified families fleeing their homes … these are not memories of the past – not any more, it’s exactly what the Russian army is doing in Ukraine right now.

‘Now Vladimir Putin’s aggression has cut the Russian people off from the rest of the world and is taking Russia back to the 19th century. This is not who you are, this is not the future you deserve for your families and children.

‘I’m telling you the truth: this war is not worthy of you, the Russian people.’

The Kremlin was cited by Russia’s TASS news agency as saying such comments would further damage prospects for mending Russian-US relations.

After more than four weeks of fighting, Russia has failed to seize any major Ukrainian city and the conflict has killed thousands of people, sent nearly 3.8 million abroad and driven more than half of Ukraine’s children from their homes, according to the United Nations.

Moscow signalled on Friday it was scaling back its military ambitions to focus on territory claimed by Russian-backed separatists in the east.

Multiple rockets struck the western Ukrainian city of Lviv near the Polish border during Mr Biden’s visit, which came as Russia faced the prospect of further setbacks in the war. 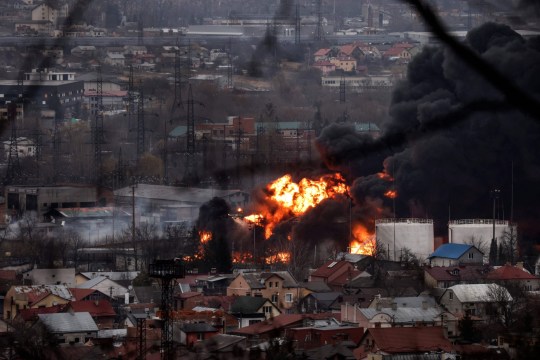 Dark smoke and flames rise from a fire following an air strike in the western Ukrainian city of Lviv (Picture: Getty)

The US president said Moscow’s troops have ‘met their match with brave and stiff Ukrainian resistance’ and have strengthened the resolve and unity of both the defending forces and the West.

‘Russia wanted less of a Nato presence on his border but now he has a stronger presence, a larger presence,’ he said.

Addressing the thousand-strong audience that included refugees who have fled the war, he told Ukrainians ‘we stand with you – period’ as he defended the nation’s president, Volodymyr Zelensky.

‘And it’s also obscene. President Zelensky was democratically elected, he’s Jewish, his father’s family was wiped out in the Nazi holocaust and Putin has the audacity – like all autocrats before him – to believe that might will make right.’

But as he made an impassioned defence of democracy, he reminded European nations they must ‘end its dependence on Russian fossil fuels’.

Sanctions, he said, have been sapping Russia’s strength and have reduced the rouble ‘to rubble’.

But he warned: ‘This battle will not be won in days, or months either. We need to steel ourselves for the long fight ahead.’

Killer mum who murdered her son, 2, after leaving chilling notes around home is jailed for life

Princess Diana: When did she die, and how old would she have been now?

It’s been over 20 years since Diana’s shocking, untimely death (Picture: Getty) A new Channel 4 documentary will…
byBizLifetime
No comments