Russian police attempted to break up a concert while a pianist was playing music by a Ukrainian composer.

Alexei Lyubimov was performing in front of a crowd in Moscow when security officers stormed the stage.

The reason given for the intervention was a bomb threat which turned out to be fake, according to reports.

Audience members rose to their feet to applaud as the pianist continued playing despite being loomed over by officers.

Mr Lyubimov, a celebrated musician who was born in Moscow and is in his late seventies, remonstrated with the officers sent into the concert hall after finishing the performance.

He was giving a recital of music by Valentin Silvestrov, one of Ukraine’s greatest living composers.

The musician could be seen briefly raising his fist as he finished the piece while the supportive crowd disobeyed the order of officers to leave the hall.


Alexei Lyubimov kept on playing despite the police officers ordering him to stop (Picture: Telegram) 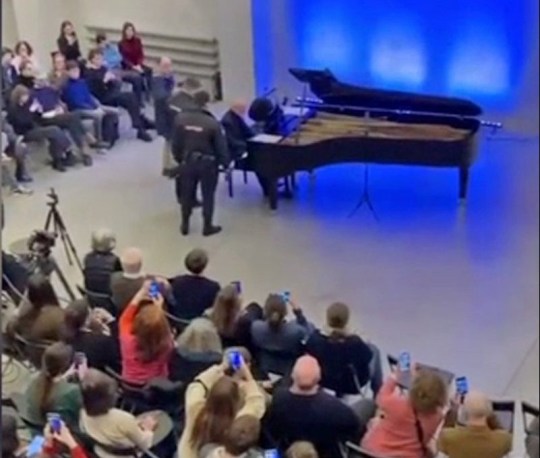 The crowd applauded and others filmed while the pianist disobeyed orders to finish the piece (Picture: Telegram)

Some reports described the concert as an ‘anti-war’ event but there were no other visible signs of dissent or pro-Ukrainian symbols.

The Kremlin has cracked down ruthlessly on any opposition to the Ukraine invasion, even outlawing public use of the word ‘war’.

Russia’s government has passed laws introducing 15-year prison sentences for sharing anti-war material online and refers to the assault only as a ‘special military operation’.

Hundreds of people are facing charges and at least 23 could receive prison sentences on the new ‘false information’ charge, according to human rights groups.

Protests have been snuffed out within minutes by huge numbers of police officers sent to forcibly remove demonstrators from the streets. 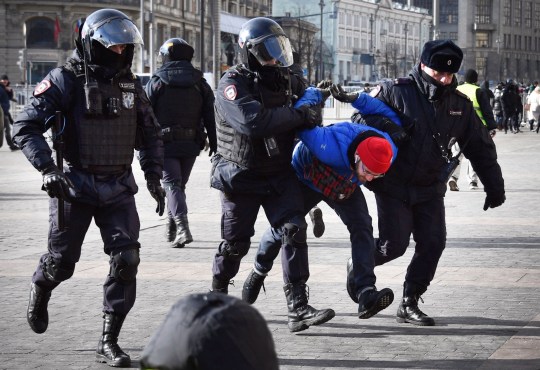 Police officers in central Moscow detain a man during a protest against Russia’s invasion of Ukraine (Picture: AFP via Getty)

Several reports have emerged of stringent action being taken against people for low-key displays of dissent.

A Russian Orthodox priest was fined £320 for ‘discrediting the Russian armed forces’ after posting an anti-war statement on his church’s website and talking to a dozen congregants during a service about the pain he felt over people in Ukraine dying.

Student Dmitry Reznikov was convicted for displaying a blank piece of paper with eight asterisks, which could have been interpreted as standing for No To War in Russian, a popular chant by protesters.

One man was reportedly detained for holding up a package of sliced ham from the meat producer Miratorg, with the second half of the name crossed off so it read Mir – peace in Russian.

We should have Bank Holiday every year to honour The Queen and pandemic heroes, says GMB’s Kate Garraway

WE are set to enjoy a bonus bank holiday this June to mark The Queen’s Platinum Jubilee. And…
byBizLifetime
No comments