Swakeleys Park: Hunt for wine drinker who has littered 100 bottles

Fuming residents in the area say they will find and ‘confront her’ (Picture: Stian Alexander)

An urgent hunt for a phantom pinot grigio drinker with a littering problem has been launched.

Angry locals in an affluent west London suburb have set up patrols – and warn it’s ‘just a matter of time’ before they find the mystery boozer, who is said to have discarded more than 100 miniature bottles in the past three months.

It’s suspected the culprit could be a woman in her 40s who drinks Stowells wine while walking her cockapoo in Swakeleys Park.

Residents in Ickenham have held meetings and have planned ‘a sting’ in an effort to finally ‘confront’ her.

One insisted there’s ‘nothing wrong’ with enjoying a tipple during a stroll.

But the group has questions for the woman, including: ‘Have you considered: Taking the bottles home? Putting your empty bottles in the bin? Buying the larger bottle for better value?’

The 18.7cl bottles have been found dotted around on benches, paths and undergrowth in the park, where nearby four-bed houses sell for around £2 million. 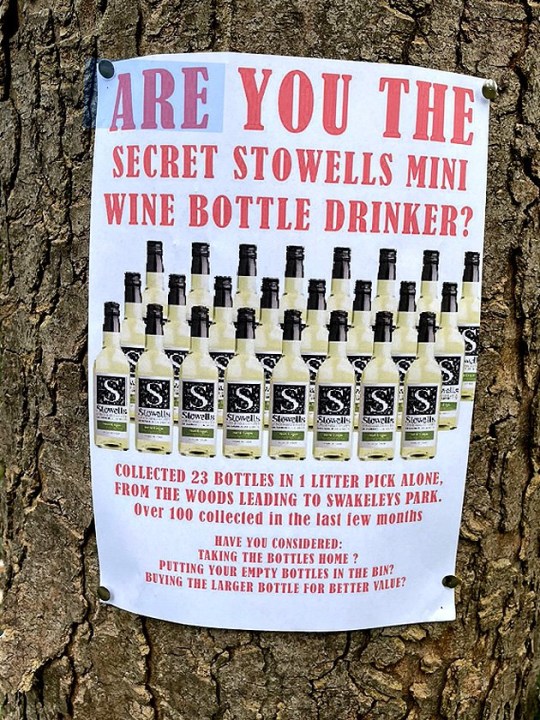 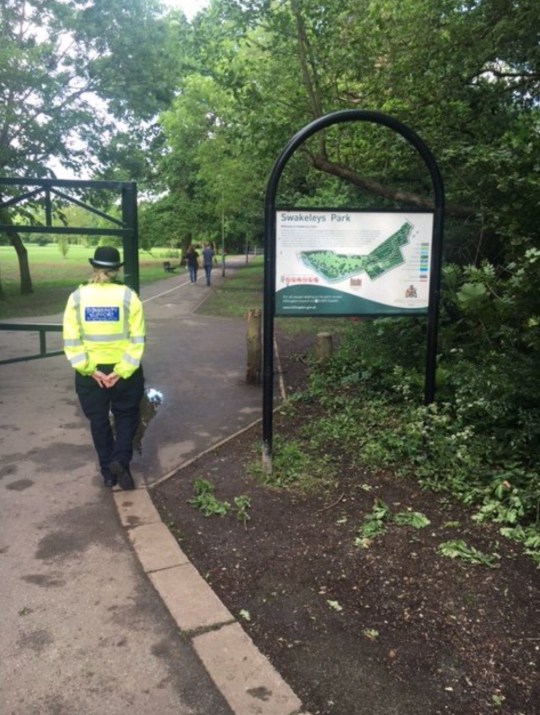 Police are not involved in the search in Swakeleys Park (Picture: Stian Alexander) 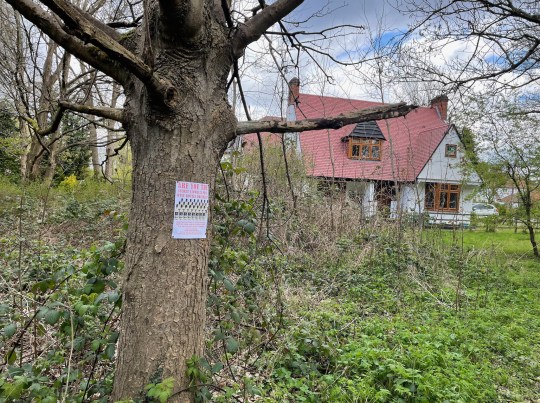 Posters have been pinned to trees and locals have held meetings (Picture: Stian Alexander)

‘Collected 23 bottles in 1 litter pick alone from the woods leading to Swakeleys Park. Over 100 collected in the last few months.’

A local who wishes to be known as Miss X says she’s ‘furious’ at herself for missing her chance to apprehend the litterbug.

‘I was out walking my dog at 6pm last Thursday and saw this woman about 200ft ahead of me’, she said.

‘Every now and again she’d bring her hand up to her mouth and as I got closer I could see it was one of the miniature bottles we’ve been finding everywhere.’

‘I took my phone out to try and get a photo, but I kept fumbling and missed it, but the woman was in her 40s or early 50s and had long, straight dark brown hair.’

‘She was wearing a blue Parker-style jacket and was a walking a dog which looked like a cockapoo or a cavapoo.’

Miss X added: ‘I am furious at myself for not following her or getting a photo, but we know when she walks her dog now, so it’s just a matter of time.’

She has been speaking to other locals who have planned a ‘sting’ on the woman later this week, saying: ‘We’ll get a few of us together and confront her.’

Local Steve Harris, 52, said: ‘There’s nothing wrong with that (drinking while walking a dog).

‘I can see why they have mini bottles as it would be a bit much walking around with a full-sized bottle or a glass, but they need to put their empties in the bin.’

Murder suspect, in his 30s, on the run after man in his 50s found dead at address

Where is St George’s Chapel? – The Sun

Boris Johnson faces a perilous day tomorrow, when the Sue Gray report is expected to be published (Picture:…
byBizLifetime
No comments