The port city has been battered by Russian attacks (Picture: Reuters)

The Mayor of Mariupol says more than 10,000 civilians in his besieged city have died since the Russian invasion began.

And the leader of the Ukrainian port city fears the final death could even be double that as the UK warned of potential chemical weapons attacks.

Vadym Boychenko claimed Vladimir Putin’s forces even brought mobile cremation equipment to the area to dispose of the bodies, as he accused Russia of refusing to allow humanitarian convoys in as part of an attempt to cover up what they have done.

His intervention comes as Russia claimed that it destroyed several Ukrainian air-defence systems ahead of a widely-expected new offensive in the east of the country.

In the UK, the Ministry of Defence says it fears that Putin could use white phosphorus munitions in a renewed push to take Mariupol.

A British defence intelligence assessment said the substance had already been used by Russia in the Donetsk region of eastern Ukraine.

White phosphorus is used for illumination at night or to create a smokescreen, but when it is deployed as a weapon it causes horrific burns. 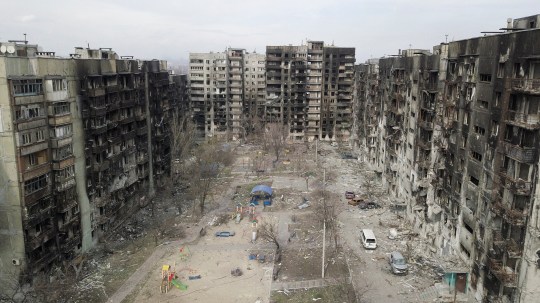 Britain fears Russia could use white phosphorous in the city (Picture: Reuters) 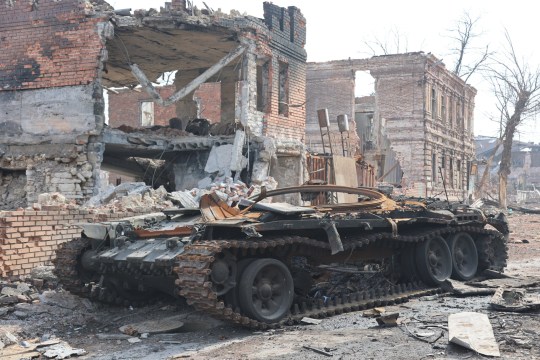 The intelligence assessment published by the Ministry of Defence on Monday said: ‘Russian forces’ prior use of phosphorus munitions in the Donetsk Oblast raises the possibility of their future employment in Mariupol as fighting for the city intensifies.’

The Department warned: ‘Russia’s continued reliance on unguided bombs decreases their ability to discriminate when targeting and conducting strikes while greatly increasing the risk of further civilian casualties’.

With their offensive in many parts of the country becoming bogged down, Russian forces have increasingly relied on bombarding cities – a strategy that has left many urban areas like Mariupol devastated and killed thousands.

The head of the separatist rebel government in Donetsk said Ukrainian forces have lost control of the port area of the city.

‘Regarding the port of Mariupol, it is now under our control,’ Denis Pushilin, president of the Donetsk People’s Republic, told Russian state television, according to Russian news agencies. 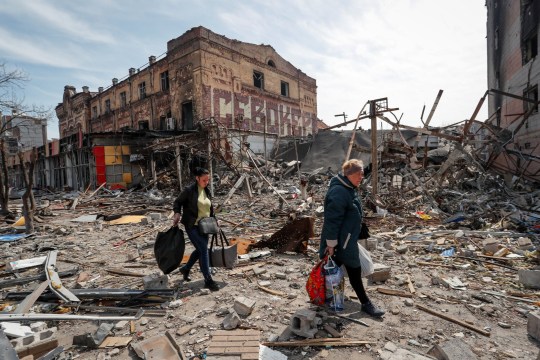 Residents carry their belongings through what remains of destroyed buildings (Picture: Reuters) 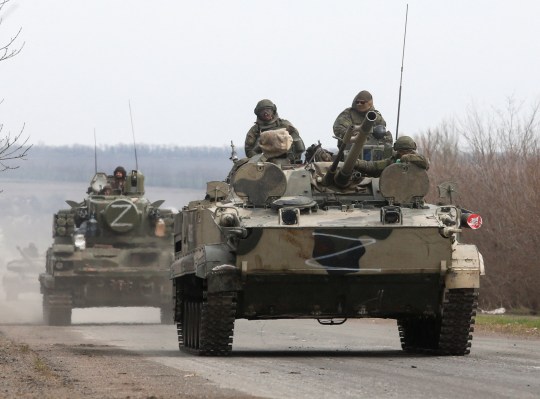 Pro-Russian troops say they now have control of the port in the city (Picture: Reuters)

Ukrainian authorities have repeatedly accuse Russian forces of committing atrocities, including a massacre in the town of Bucha, outside Kyiv, airstrikes on hospitals and a missile attack that killed at least 57 people last week at a train station.

But the situation in Mariupol is feared to be one of the worst in the country, with President Volodomyr Zelensky regularly using the desperation there as an example of Russian brutality.

Many residents have been left without water, heat, working sewage systems amid the relentless bombardments, which have pounded buildings and left them struggling to escape.


Elsewhere, the Ukrainian leader used his nightly address to warn Ukrainians to brace for a Russian onslaught in the country’s east.

‘Russian troops will move to even larger operations in the east of our state,’ he said.

‘They can use even more missiles against us, even more air bombs. But we are preparing for their actions.

‘We will respond. We will be even more active in providing Ukraine with weapons.’

Damien has decided to re-do the challenge to raise money for a different charity (Pictures: Damien Davis/Just Giving)…
byBizLifetime
No comments

I spent £50,000 on an extension but council is making me DEMOLISH it… I can’t sleep over it

A GRANDMA is being forced to demolish her £50,000 extension by the local council. Linda Webb, 66, is…
byBizLifetime
No comments