The move marks an escalation in the energy stand-off between Russia and the West which is sending bills soaring (Picture: Sputnik/AFP/TNS)

Vladimir Putin has threatened to cut gas supply to ‘unfriendly countries’ from tomorrow.

The Russian president signed a decree ordering nations which import energy to open accounts with a state-linked bank and pay for it in rubles.

If not, the Kremlin warned, they will be ‘in breach of contract’ and supplies will stop.

Europe has been trying to end its reliance on Russian gas in response to the Ukraine invasion but it is expected to take years to do so in full.

Major disruption to imports from Russia will add to the crisis in the gas industry on the day a steep rise to bills for households across the UK kicks in.

Publishing the decree, the Russian leader said: ‘In order to purchase Russian natural gas, they must open rouble accounts in Russian banks.

‘It is from these accounts that payments will be made for gas delivered starting from tomorrow.

‘If such payments are not made, we will consider this a default on the part of buyers, with all the ensuing consequences. 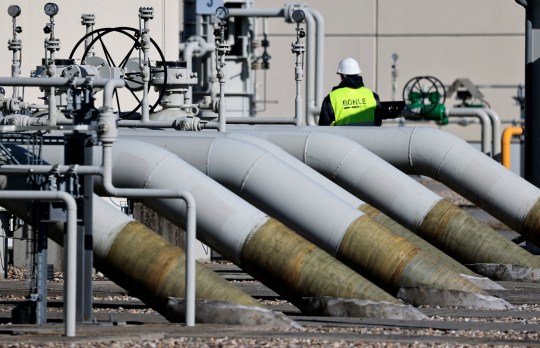 Gas piped in from Russia keeps the heating on across Europe but governments want to end this reliance on Putin’s energy (Picture: Reuters)

‘Nobody sells us anything for free, and we are not going to do charity either – that is, existing contracts will be stopped.’

The decree sets up a formal mechanism whereby buyers will transfer currency into a Russian bank account which will then be used to purchase rubles from Russia and then forwarded on to energy firms.

There were signs in recent days Russia was softening its ‘rubles for gas’ policy but Mr Putin appears to have escalated the stand-off.

Germany and Austria, both of which are heavily reliant on gas piped in from Russia, have taken initial steps to prepare for rationing this week with the threat of supply cut offs looming.

As well as increasing uncertainty around Europe’s turbulent gas market, the Kremlin move is also an attempt to bolster its currency after sanctions saw its value plummet.

European countries have described the demand as ‘blackmail’ and say it breaches long-standing contracts.

German economy Minister Robert Habeck said Germany was prepared for all scenarios, including a stoppage of Russian gas flows to Europe, and accused Mr Putin of trying to ‘divide’ Europe. 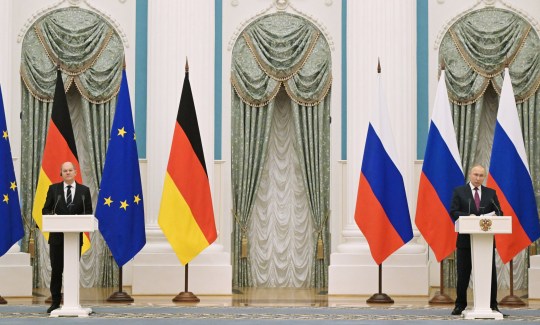 Cutting off energy to a major European market like Germany would trigger a crisis in the European gas market (Picture: EPA)

The G7 previously rejected the proposal outright when it was first touted by the Kremlin.

Following the announcement, German chancellor Olaf Scholz said his government would keep paying in euros and dollars, setting up a showdown with Russia.

The UK is far less reliant on Russian gas imports than its European neighbours but any disruption on the continent will doubtless push global prices up and the effects will be felt elsewhere.

They said: ‘It is also incredibly difficult for Russia to stop selling oil and gas to western Europe and even if over a period they might be able to increase some sales to the east, to China, to India, it is not going to replace sales that they are currently making to western Europe.

‘I am very skeptical these sorts of threats will be seen through, I think it would just be too damaging to the Russian state.’

Officers slammed the incident as ‘unbelievable’ (Picture: Getty Images/iStockphoto/J_Ded/Twitter) A dog was left trapped in a vehicle on…
byBizLifetime
No comments

Heartbroken dad accidentally ran over and killed his son, 3, as tot played on bike at family farm, inquest hears

Teacher who ‘waved fake penis’ at colleagues struck off

Derek Turkington was found to have behaved inappropriately (Picture: Facebook/Deadline News) A teacher has been struck off for…
byBizLifetime
No comments