Names are scattered across the peeling wall of a school basement in Ukraine.

Each represents a death caused by Russian troops since the village of Yahidne, north of Kyiv, was invaded in early March.

Those who stayed to guard their homes were shot dead by soldiers, locals say.

And 300 villagers sent to a school basement faced their own battle against malnutrition and freezing temperatures.

Halyna Tolochina, a member of Yahidne’s village council, told reporters how terrified children were forced to watch on as their elders became more and more sick.

In a heartbreaking video, her quivering finger slides down the list of names.

Children’s drawings of fluffy clouds, colourful rainbows and flying birds can be seen opposite the writing.

On the left of the basement’s green door are seven names of people killed by Russian soldiers.


Halyna Tolochina wearily adds to the list of names as Tamara Klymchuk watches on (Picture: Reuters) 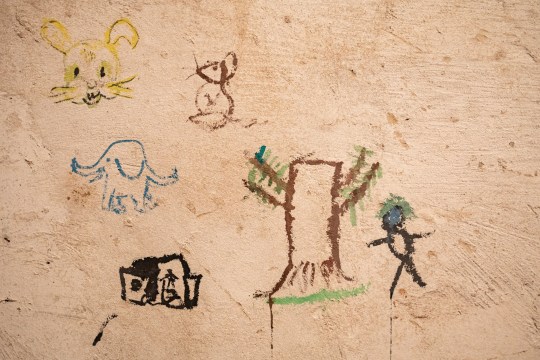 An innocent child’s drawing seen on the wall – just opposite the list of the dead (Picture: Reuters) 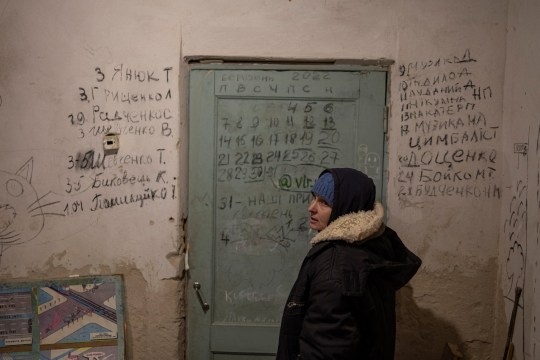 Names and dates were written in black on the plaster either side of a green door (Picture: Reuters)

They include brothers Viktor and Anatolii Shevchenko. Viktor’s body was found and buried above ground, but Anatolli’s was never recovered.

To the right of the basement door are the 10 names of people who died due to the horrific conditions underground.

There was no electricity, no toilets and little food or water for those sheltering.

‘This old man died first,’ Tolochina said in the video, pointing at the name of Muzyka D, for Dmytro Muzyka, whose death was recorded on March 9. 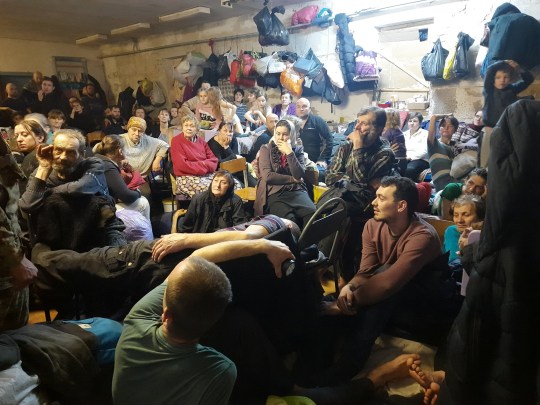 Residents of Yahidne were packed inside the basement of the local school (Picture: Reuters) 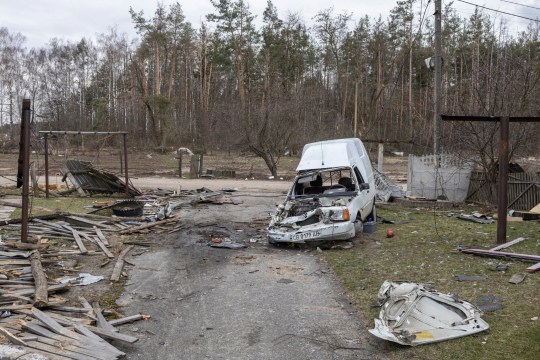 Shelling has reduced the once-popular holiday destination to a shell of what it once was (Picture: Reuters) 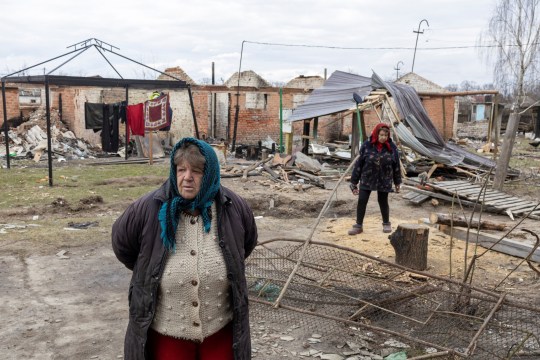 Hanna Khlystun stands among destroyed houses in the village of Yahidne (Picture: Reuters)

Muzyka’s body lay for a few days in a boiler room until, during a break in shelling, people were able to move bodies into hastily dug graves at the village cemetery.

Nadiya Budchenko is the last name on the basement wall. She died on March 28, just two days before Russian troops withdrew from the village.

When the soldiers first arrived in early March, some offered to share rations and appeared to be relatively ‘well behaved’.

But a drastic change in behaviour soon emerged as soldiers started to loot the village and ‘take everything they could grab’.

Ukrainians were ordered into the school basement on March 5 where they were to spend the next 25 days. 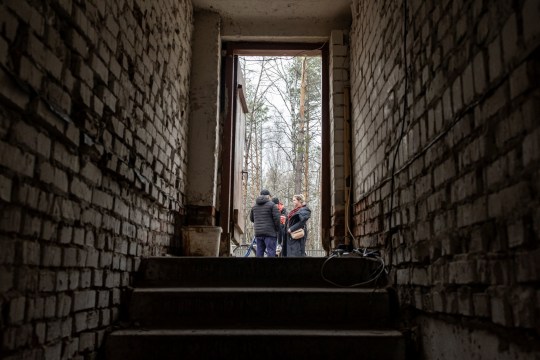 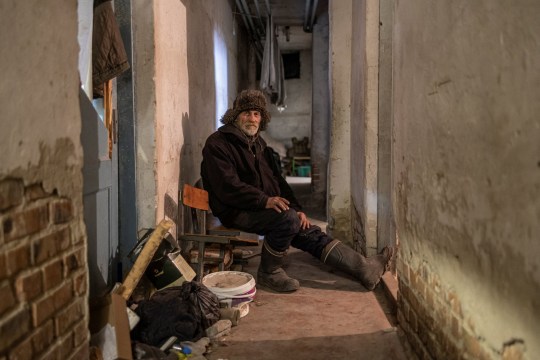 Resident Ivan Balanovych sits inside the basement of the village school (Picture: Reuters) 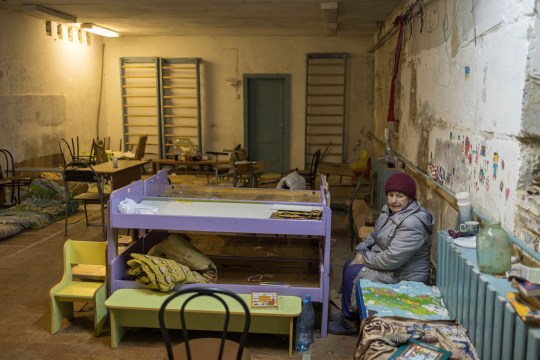 The lack of space meant people sheltering took it in turns to lie down and sleep (Picture: Reuters)

They were forced to share buckets for a toilet and take it in turns to sleep, as there was barely any space to lie down.

Olha Meniaylo was in the basement with her 32-year-old son, his wife and their children – a four-month-old baby boy and an 11-year-old girl.

She said: ‘It was almost impossible to breathe.

‘For the elderly, it was difficult to stay there in the dark without fresh air, so it was mostly the old who died.’

It was not until the Russians started their withdrawal on March 30 that those trapped in the basement ventured out, said 64 year-old Tamara Klymchuk.

Her son-in-law, Viktor, was among those killed by Russians.

She told reporters the release from the school basement felt like being ‘born again’. 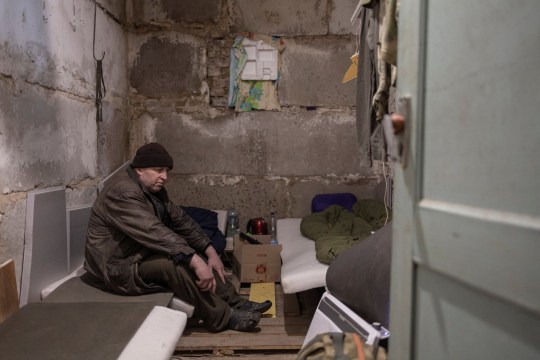 An exhausted Serhii Bondarenko sits inside a room in the basement of a school (Picture: Reuters) 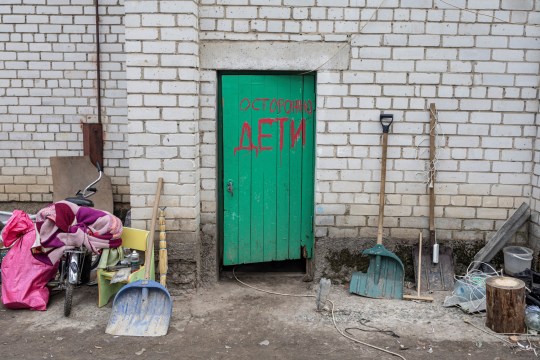 The word’s ‘Be careful, children’ were etched onto the entrance to the basement (Picture: Reuters) 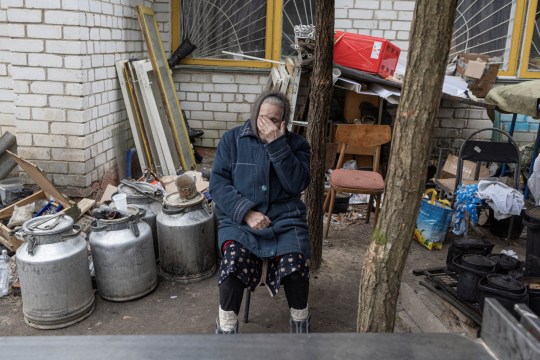 The village, once a popular holiday destination in Ukraine, has been near destroyed as a result of Russian attacks.

Harrowing pictures have also emerged this week from Bucha, where Russian troops are suspected of killing dozens of civilians.

And recent bloodshed in Borodyanka, north-west of Kyiv, resulted in the deaths of around 300 people.

Ukraine’s prosecutor general Iryna Venediktova, said yesterday there is ‘evidence of the Russian forces’ war crimes is at every turn’.

The Kremlin continues to claim Ukraine are ‘fabricating’ evidence and say their troops are not targeting civilians.

Foreign secretary Liz Truss said earlier this week that the UK would ‘fully support’ any investigations into potential Russian war crimes in Ukraine.

She added: ‘We will not rest until those responsible for atrocities, including military commanders and individuals in the Putin regime, have faced justice.’

The 21-year-old was found with serious stab injuries under the Westway flyover in Ladbroke Grove, west London (Picture:…
byBizLifetime
No comments

THE Duke and Duchess of Sussex’s children have become Prince Archie and Princess Lilibet, following the death of…
byBizLifetime
No comments

Family heartbroken after boy, 4, with ‘beautiful smile’ hit and killed in horror crash

Girl, 3, ‘tortured and killed by family during exorcism’

The 25-year-old mother was arrested after the death of her daughter was ruled a homicide (Pictures: Claudia Elisa…
byBizLifetime
No comments