Known only as RM, the walker paints stones with messages like ‘MEAT: Murder, Evil, Agony, Torture’ and ‘I’ll kill them all unless they’re vegan’ (Picture: f******g_hostile_vegan_sausage / Instagram)

A vegan activist has been called out for leaving ‘offensive’ messages on rocks at the summit of Scotland’s highest mountains.

The mountaineer, known only by the initials RM who posts under the handle ‘f******g_hostile_vegan_sausage’, shares pictures of his controversial work on Instagram.

RM places brightly coloured stones on Munros – mountains in Scotland higher than 3,000 feet – with messages on them which read ‘MEAT: Murder, Evil, Agony, Torture’ and ‘I’ll kill them all unless they’re vegan’.

He calls himself a ‘metal head Munro bagger’ and apparently aims to leave slogans on all 282 Munros in Scotland. The best-known is Ben Nevis.

But campaign groups including Ramblers Scotland and Mountaineering Scotland have urged RM to follow the ‘leave no trace’ policy.

‘We have seen an increased pressure on the outdoors and particularly the Munros over the last couple of years and many new people out enjoying the benefits of hillwalking, but our message is that it’s not okay to leave painted rocks or anything else behind,’ Stuart Younie, chief executive of Mountaineering Scotland.

Horrified walker Anne Butler found a stone with ‘be kind to animals or I’ll kill you’ written on it.

She said: ‘Whatever your beliefs, leaving them painted on a cairn on a remote Munro top is nothing more than an act of vandalism. 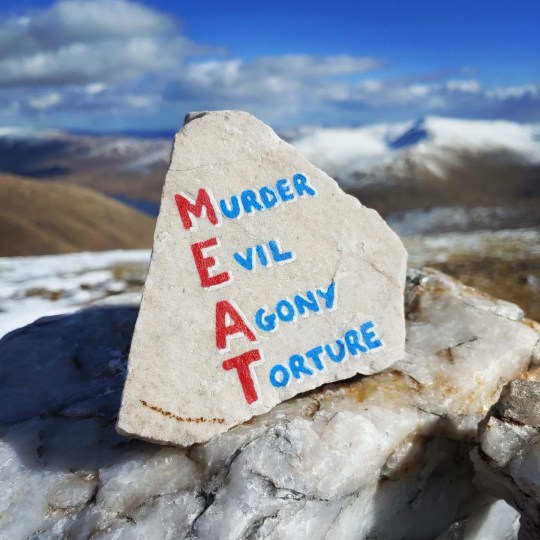 Walkers have been left shocked and horrified by the meat-free slogans (Picture: f******g_hostile_vegan_sausage / Instagram) 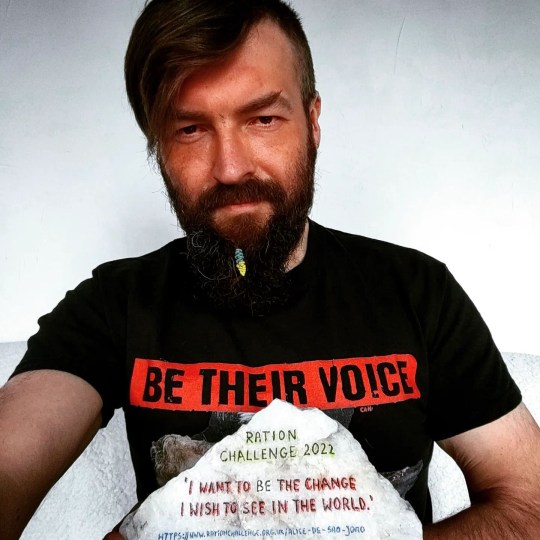 RM calls himself a ‘metal head Munro bagger’ and apparently aims to leave slogans on all 282 Munros in Scotland (Picture: f******g_hostile_vegan_sausage / Instagram)

‘Please respect the environment and leave it unspoilt for all who use it. I buried the offending rock under a lot of others, hopefully never to be seen again.’

RM said: ‘It’s obvious that it’s the message that offends them, not the paint on the small rock.

‘So, what I’m saying is, let’s maybe not make a big deal out of little rocks in the mountains.

‘On my hikes I’m finding other painted rocks. With flags, usually Scottish, with expressions of love, mental health support, advertising things, some were painted to resemble a ladybug or a frog.

‘I have never removed any of these. If anything, I’m putting them back on top of the cairn. 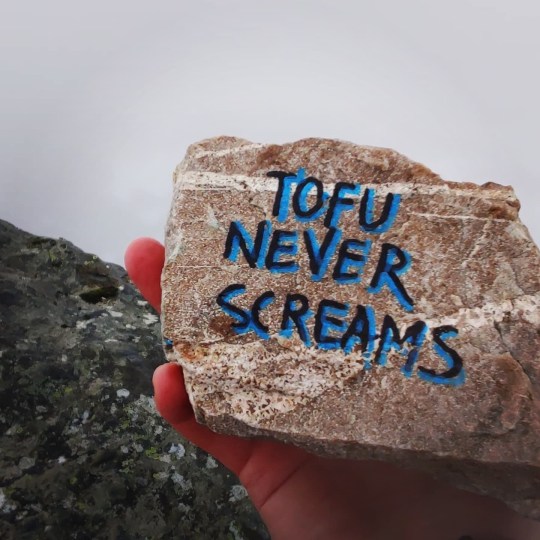 Mountain campaign groups have urged RM not to leave things behind on the Munros (Picture: f******g_hostile_vegan_sausage / Instagram)

‘Shame on these people who remove them although I suspect they only remove mine.’

He so far appears to have conquered around 100, with his first stone labelled ‘go vegan’ appearing on Glas Maol, near Glenshee, in September last year.

One rock at the summit of Beinn Achaladair, above Glen Orchy, was an acrostic, and spelt out ‘Meat: Murder Evil Agony Torture’, with another saying: ‘Keep my animal friends out of your f*****g mouth.’

A stone on Meall Garbh, by Ben Lawers in Perthshire, features a quote from the Keanu Reeves film John Wick: ‘Be kind to animals or I’ll kill you.’

Another on Sgiath Chuil in Glen Dochart is from ancient philosopher Pythagoras: ‘For as long as men massacre animals they will kill each other. Indeed, he who sows the seeds of murder and pain cannot reap the joy of love.’ 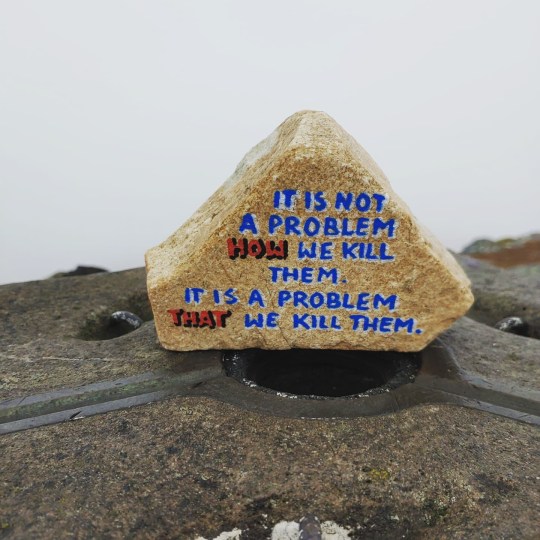 RM admitted ‘all rocks around were quite rough and writing took some time and effort’.

He said he and his wife have been challenged by other hikers and have been called ‘criminals destroying nature [who] should be reported to the police’.

He invited Police Scotland to contact him and added: ‘I’ll happily discuss my vandalism and hurting some animal abusers’ feelings.

‘You don’t like messages on these rocks? Messages that basically say “be kind”, “do not harm”, “do not kill”? That offends you? You know why? Because you’re hypocritical.’

He thanked people for their support on Instagram yesterday, writing: Hello friends! I’d like to thank you all from the bottom of my heart for yesterday’s support.

‘The amount of comments left me in awe and deeply moved. It was completely unexpected and I could barely keep up with replying.

‘I hope I haven’t omitted anyone, I’m very sorry if I have. You’re absolutely fantastic, I love you all and I am extremely honoured to be part of this wonderful community.’

Barristers accused of ‘letting down victims’ by voting to strike indefinitely

BARRISTERS were last night accused of letting down victims by voting to strike indefinitely. Wig-wearing advocates in England…
byBizLifetime
No comments

Olivia Pratt-Korbel: Police ‘covered gunshot wound to try to save her’