Countryfile star Jules Hudson is intrigued by ‘50 Shades of Grey’


Jules made some out-there moves with his first home (Picture: Getty/ITV)

If you think property show presenters don’t practice what they preach, you haven’t met Jules Hudson.

The Escape To The Country presenter went further than even the show’s most adventurous couples and bought a derelict house with an outside loo in a rural Welsh village.

Did you escape to the country?

I bought my first home in a tiny Welsh-speaking mountain village called Llanddewi Brefi – otherwise known as the fictional home of the ‘only gay in the village’ [from TV series Little Britain, where the character Daffyd Thomas lived].

It was a tiny two-up, two-down stone-built wreck, dating to the turn of the 18-19th centuries. Having lived in the village as an archaeology student from 1989 to 1992, I fell in love with the place, its people and the drama of its mountainous surroundings.

When did you decide to buy?

In 1997. I bought it for the then princely sum of £29,000, and it was a stretch even then. It had no bathroom, no kitchen, an outside loo, it had one plug and two 1930s Bakelite light fittings, and all the floors were rotten.

However, I was lucky enough to get a small renovation grant from the local authority and by 1998 it was ready to go, having been completely gutted and dragged into the 20th century.

The whole process instilled a love of building and renovation that is still as exciting today as I renovate our current home on the Welsh Borders.

How was the renovation?

It was derelict – we took the roof off, dug up the floors and started again within the original shell. It had probably been an old smithy – the remains of which I found. The forge I converted into a great vaulted kitchen. 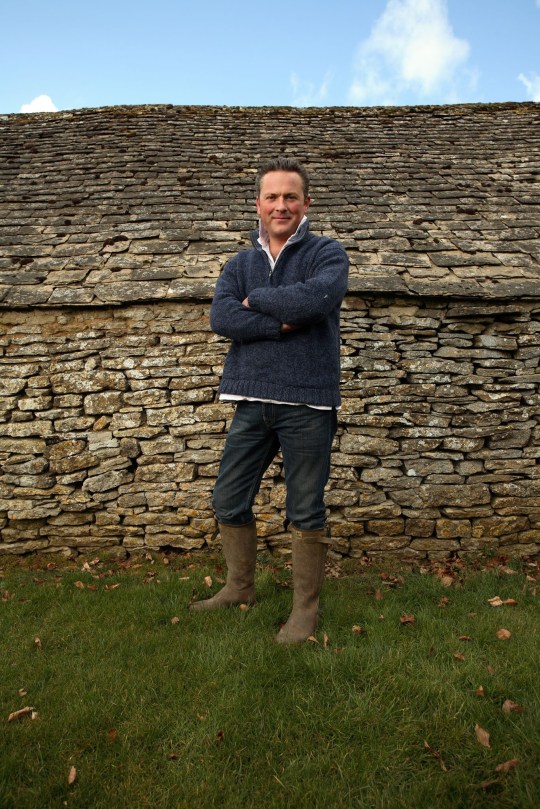 It was hugely exciting to create a home of my own from scratch. Having grown up in a B&B and then be sent to boarding school, I was yearning for my own space and that’s what it gave me, among a stunning and ancient upland community.

I knew Alex and Fiona Cox, who went on to found Cox & Cox. Fiona, then a brilliant designer on the BBC’s Changing Rooms, persuaded me during a boozy evening to paint the living room mustard yellow – and it worked.

It’s interesting to see these bolder heritage colours now coming back after the recent ‘50 Shades of Grey’ revolution.

I had grown up in Essex and Suffolk but there was no way back in the mid-1990s that I could afford anything there on the market. I’d then spent nearly eight years living in rural Wales, surrounded by the mountains and immersed in the Welsh culture, so I knew that if I were to buy it would have to be in Wales.

Have you always been into property?

I’ve always been fascinated with historic architecture and the skills needed to conserve it. I am a firm believer that walls do talk, imbued as they often are with centuries of use, perhaps because I grew up in Colchester, Britain’s oldest recorded town. This inspired a career as an archaeologist.

I love piecing together the story of a building from the many clues it may contain.

What would you have done differently?

Seeing how property prices have steadily risen over the years, I’d have been shrewder and more adventurous in buying more to create a reliable portfolio to support me into old age.

Are you a property addict?

All the time. Yes it’s part of my job, but we are always on the lookout for fascinating properties – even if we couldn’t afford most of them.

I also love viewing properties with friends before they take the plunge on a property – a process which does occasionally surprise a few vendors.

What’s your advice for a first-time buyer?

Jules Hudson’s new book, The Escape To The Country Handbook, is out now, and £13.59 from Amazon.

The flat is in Belgravia and is listed for far less than the market average (credit: Wellbelove Quested)…
byBizLifetime
No comments

Our neighbour has to pay us £237,000 after his £4m mansion’s extension crossed 18 INCHES into our home

A MOTIVATIONAL speaker must pay his neighbours £237,000 after his £4million mansion’s extension crossed 18inches into their home.…
byBizLifetime
No comments

These first homes outside London are perfect for commuters

Table of Contents Hide Canal Quarter at Kingsbrook, Aylesbury, Buckinghamshire, from £129,997 for 50% of £259,995Marleigh, Cambridge, from…
byBizLifetime
No comments

AN unassuming £450,000 three-bedroom home is fit for a rock star thanks to its very colourful secret. The “must-be-seen”…
byBizLifetime
No comments