At the age of just 12, motor-mad Jim Stewart had his first car.

To be fair, that’s not quite as cool as it sounds: it was his mum’s knackered old Fiat Panda and he’d sit behind the wheel in the garage dreaming of one day taking it out on the road.

‘When my dad sold it as scrap for a tenner, I was gutted,’ laughs Jim. ‘He gave me the cash, but I really loved that car.’

It was however, the beginning of a lifelong passion for vehicle salvage that has led him to starring in his own TV show. Full Metal Junkies, which premières tonight, sees Jim and his maverick mates save battered vehicles from the scrapyard and give them a whole new lease of life.

Buses, ambulances, horseboxes and trucks of all shapes and sizes find their way to Jim’s quirky junkyard, where they are lovingly restored and expertly transformed into luxury homes, quirky campers and more.

Jim reckons bus living – a huge craze in America – is catching on in the UK as a more affordable and sustainable way to live, particularly as young people are being priced out of the property market and struggling to pay rents, and energy bills are going through the roof.

‘Living in a vehicle used to have a stigma,’ says Jim. ‘But being off grid with solar panels and rechargeable batteries suddenly seems a really attractive option now. Especially when you see what we can do. We’ve built buses bigger than a London flat for less than £50,000! 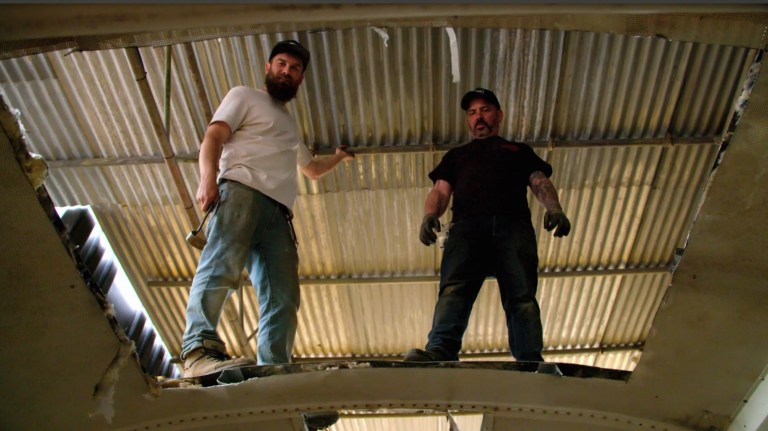 ‘It’s pretty tragic that there’s no second-hand market value as some vehicles might be 20 years-old but they only have only 40,000 miles on the clock. I guess we are scrap angels – we see their potential and love the challenge of giving them a new purpose by turning them into something fun, useful and really cool.’

‘We teamed it with an identical model we had in the yard,’ says Jim. ‘They drive independently, but can be connected when parked up to make one double-storey dwelling that’s as big as a family house.’

After fine-tuning the engines and body work, Jim and his talented team hand-built a fitted kitchen made from reclaimed materials and concrete tops.

‘A concrete worktop can cost the best part of two-and-half grand. We made this for 75 quid. As the bus would be on the move, we reinforced it using steel scraps from our skip. We use reclaimed materials whenever we can. I never throw anything away because everything can be used.’

‘Jim and his team were our van angels’ 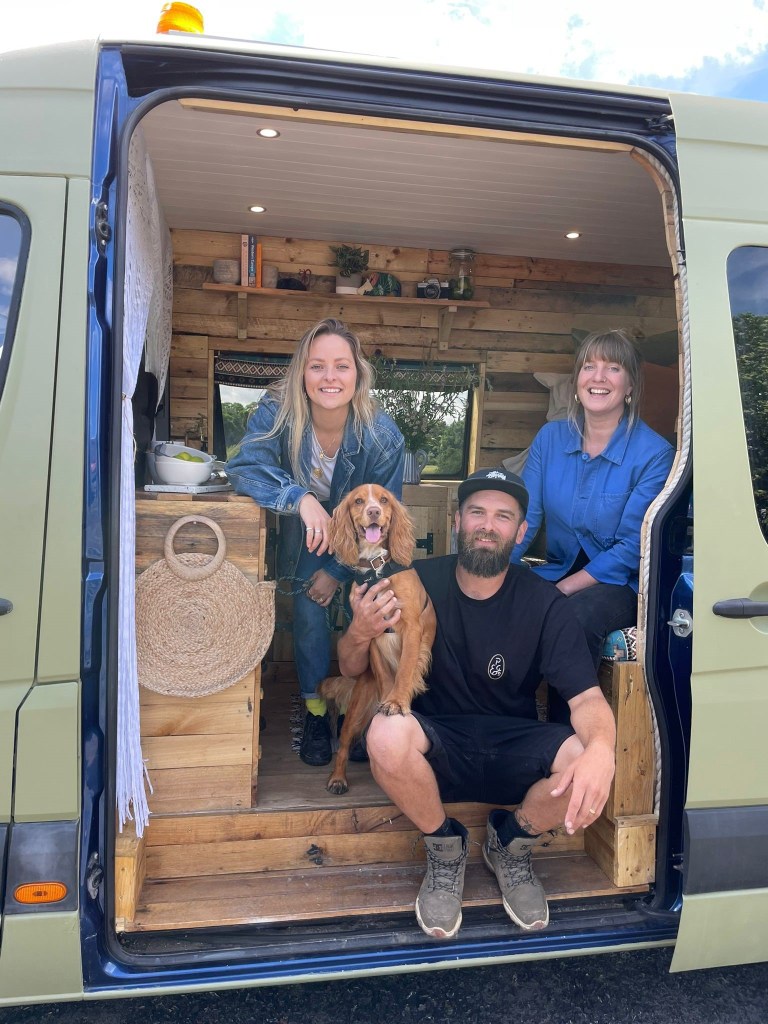 Heather Carley bought a former electricity utility van for £7,500 after it was involved in an accident, but was gutted to discover it needed £3,000 of mechanical work to make it roadworthy.

So with just £4,500 left of her budget, she tracked Jim down on Instagram and begged him for help. ‘Jim and his team were our van angels,’ says Heather.

‘We had a trip booked that we couldn’t cancel and they turned our van around in just two-and-a-half weeks. They went above and beyond and we owe them the world.’

Heather lives in Walthamstow with her partner Alana and their dog Bagel, and they regularly pack up the van to set off for adventures, sometimes for months on end.

‘It now has everything we need to live completely off grid,’ says Heather.

‘When you live in a small space it forces you to be aware of how much stuff we all have – and how little we actually need. We take one small bag of clothes each and buy food from farmers markets every day as we don’t have a fridge.

‘That reduces food waste which saves money. And when we WFV [work from van] we are conscious of the energy we consume to conserve the batteries, so use our phones and laptops sparingly.’

After getting the van through its MOT, Jim and his team insulated it, clad the walls and ceilings in reclaimed timber and hand-built a kitchenette complete with sink, running water and hob.

They built a fixed bed with storage, added a pull-out table, padded seating and fitted lights, curtains and shelves to make it feel like a cosy home from home.

The back has ample storage for the batteries (powered by solar panes) as well as surfboards and skis. There’s also a shower: ‘Perfect for hosing down salty wetsuits or a muddy puppy,’ laughs Heather.

‘We asked for something sexy with chill-out vibes and our van angels delivered.’

‘A new double decker would set you back half a million quid but they can do at least 1.8 million miles. For less than £50,000 we created a top of the range off-grid home with all mod cons that’s as big as a family house, but much more fun.’

Jim worked in the motor trade when he left school, then headed to the ski slopes in France where he taught himself carpentry and converted his own campervan. 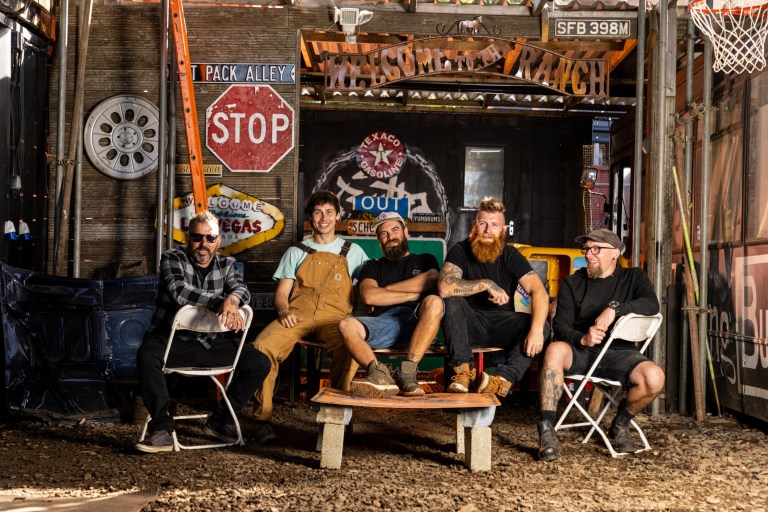 Jim’s gang have dealt with all kinds of vehicles (Picture: Discovery+/James Cheadle)

Big surf brand O’Neill were so impressed they paid him to makeover their tour bus. He’s since saved and converted hundreds of vehicles at his Surrey-based company Shred & Butta.

They helped Johnny Vegas build three buses in his show Field Of Dreams – and the producers were so impressed they gave the maverick team their own show.

‘We’ve fitted hot tubs, dog showers, kids’ playrooms. We’ve also converted vans into mobile businesses, notably over lockdown so people could get
out on the road to offer their services where people need them.

‘It’s a fun and affordable and sustainable way to live, especially now as people are realising they can spend their money on living and not the cost of living.’

Will and Ed’s American Schoolbus 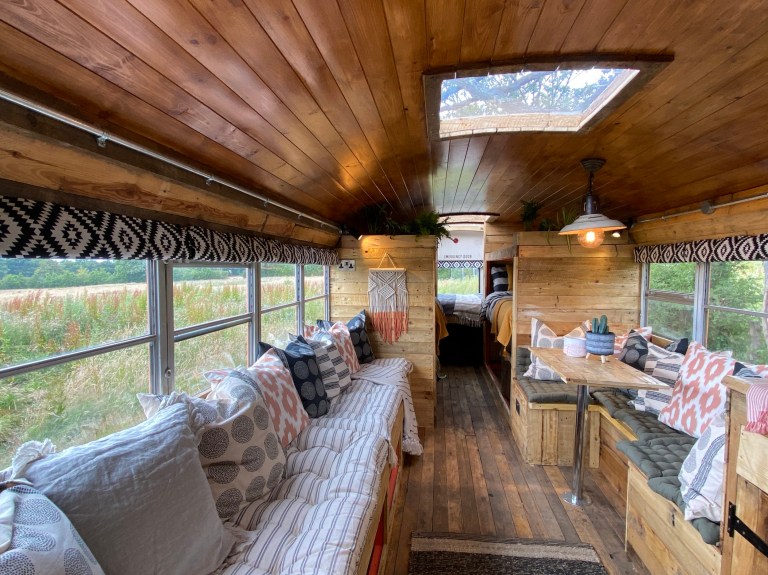 This van has a distinctive Nordic feel (Picture: D+)

Jim was given a £13,500 budget and had free rein to convert this bus for a returning customer. It was given a Skandi makeover with rustic wooden boards and panelling throughout, a kitchen diner and a big sofa area.

It has two bedrooms – one with single bunks and a master with a cut-out glass ceiling above the bed to enjoy the night sky. 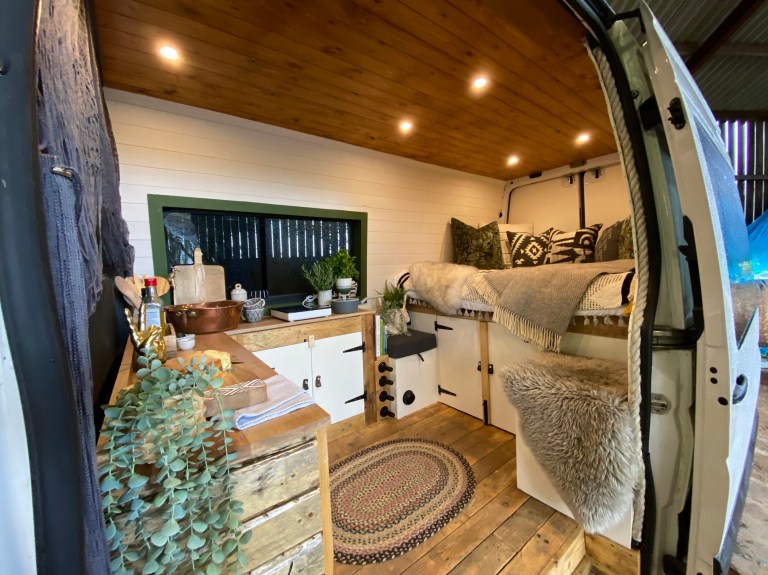 The power of the sun keeps this van going (Picture: D+)

This tiny VW was given a light and airy modern interior with white tongue and groove walls, rustic floorboards and a reclaimed fitted kitchen with a sink, hob and even a wine rack.

There are solar panels and diesel heaters to allow her to be totally off-grid. 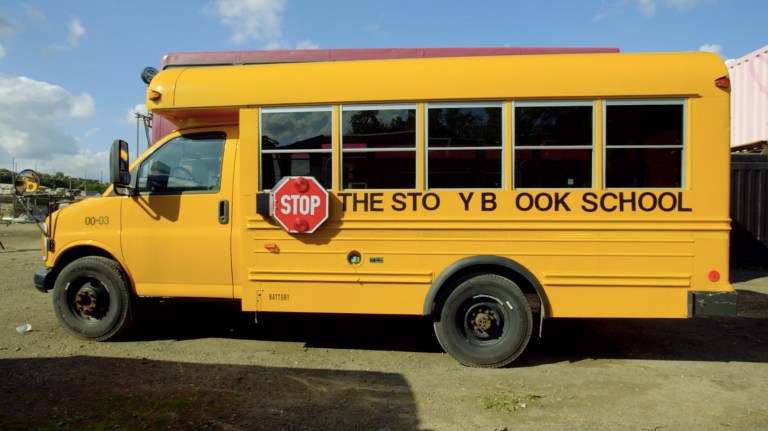 This is a fully functioning tiny home with a turquoise kitchen and white tiled walls, poured concrete worktops and a breakfast bar.

There’s a full-size shower in the bathroom and a flushable loo. There’s also a glass panel cut into the side of the bus to create a statement picture window. 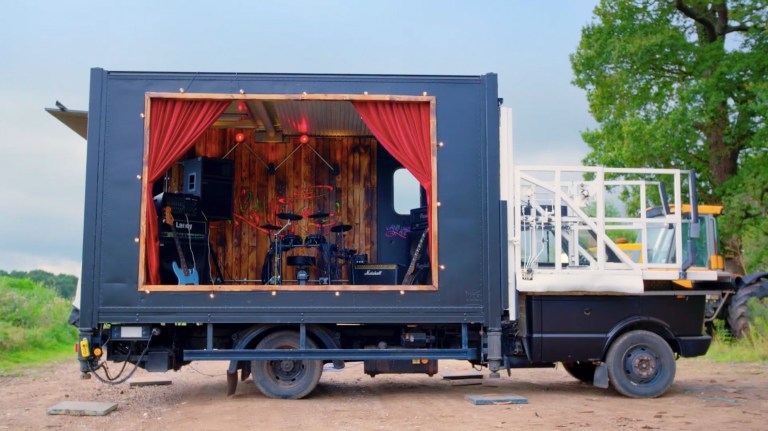 This concert truck is ready for a premiere (Picture: D+)

Jim was offered a hydraulic pod, used to transport inflight meals to aircraft.

‘I had no idea what we’d use it for but there was no way I could see that going to scrap. So we created a portable festival stage.’ 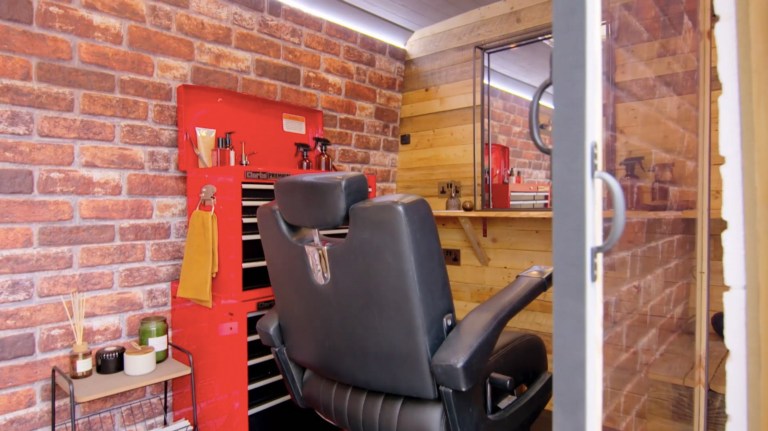 Have a haircut on the move (Picture: D+)

Seif saw Jim last summer after his business was affected by the pandemic.

‘He wanted to turn his van into a barber shop, but needed it to be as stylish as it was safe for his customers. We fitted rechargeable batteries which charged as he drove.’

Full Metal Junkies starts tonight at 9pm on Quest and is also available on discovery+.

It even has an organ room (Pictures: North News & Pictures) A property developer has given a Jacobean…
byBizLifetime
No comments

Hampstead mansion with stunning grounds up for sale at £15million

Beautiful (Picture: Tony Murray) The chance to live in a stunning home in one of London’s prettiest areas,…
byBizLifetime
No comments

DIY can be a real money saver (Picture: Karen McCarthy) One couple took their conservatory renovation into their…
byBizLifetime
No comments

A winner (Picture: SWNS) A garden boozer made entirely from recycled materials has been crowned Britain’s best Pub…
byBizLifetime
No comments