But Multan Sultans’ paceman Shahnawaz Dahani was not just too quick for the Quetta Gladiators batsmen, he was also too nimble for Aleem in the strange exchange.

Brilliant Shahnawaz Dahani took 2-22 in three overs and was also too elusive for umpire Aleem Dar in the fieldCredit: Sky Sports 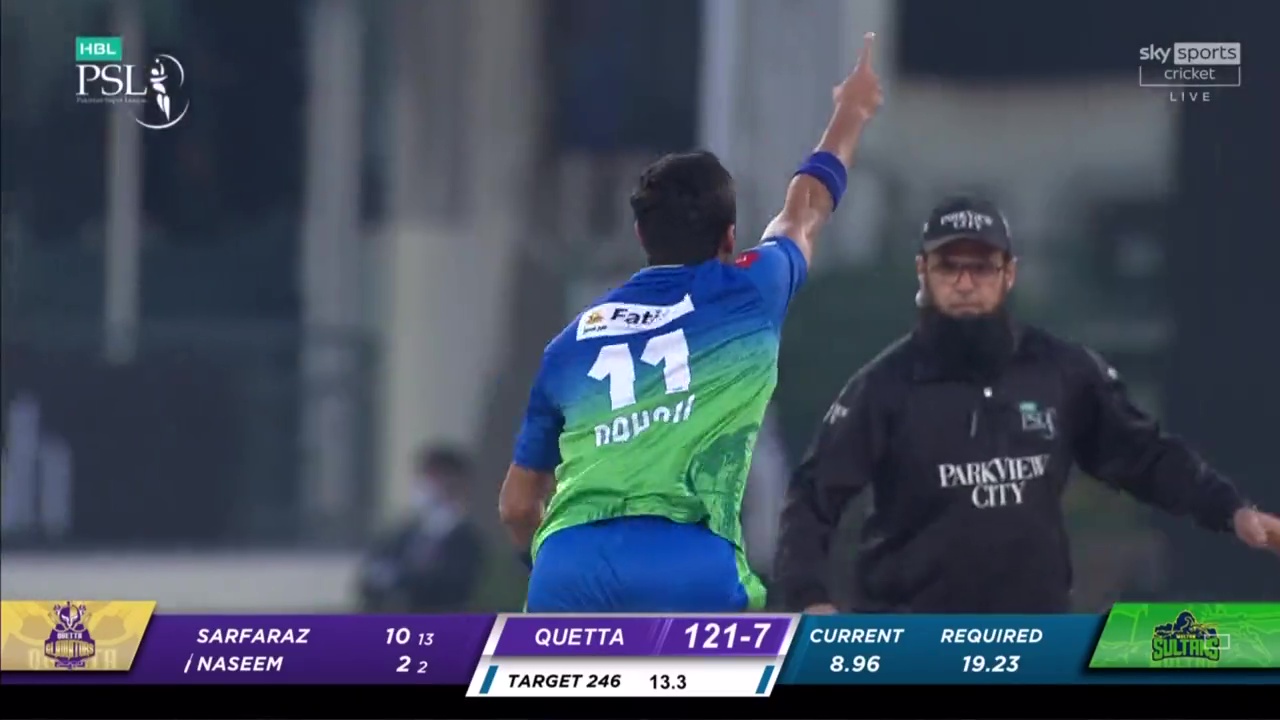 Aleem Dar has his eyes on the prize but can’t catch the nippy Shahnawaz DahaniCredit: Sky Sports

Aleem looked more like a determined rugby full-back with a winger steaming straight at him than the highly-experienced Test umpire he is.

Dar has stood in 136 Test matches and 271 limited-overs internationals.

The 53-year-old readied himself on his toes and with arms wide open as he attempted to halt the charging Dahani.

But the Pakistani official was no match for the fellow countryman 30 years his junior.

The Sultans’ sensation sidestepped Dar at the last moment like a spinner’s googly beating the bat.

Fans’ favourite Dahani was jubilant after clean-bowling Naseem Shah for his second wicket.

So it was understandable when he streaked away with joy.

Beaten Dar could only respond with a wry smile as the bowler zoomed off behind him towards the boundary.

Danahi went on to finish with match-turning figures of 2-22 in three overs as the Sultans landed the biggest victory in PSL history.

They crushed the Gladiators by 117 runs, despite Jason Roy’s latest lightning knock.

The England white-ball specialist hit seven fours and a six in his 38 off 19 balls at the Gaddafi Stadium in Lahore.

But after winning the toss and batting first Sultans had amassed the second-largest PSL total ever, 245-3.

WE saw it all through the Tour of Hell Down Under… if you can’t get the wickets, you…
byBizLifetime
No comments