BRILLIANT Ben Stokes bludgeoned a stunning ton to give England a Barbados bounce.

Stoke wowed the crowd with a stunning centuryCredit: AFP 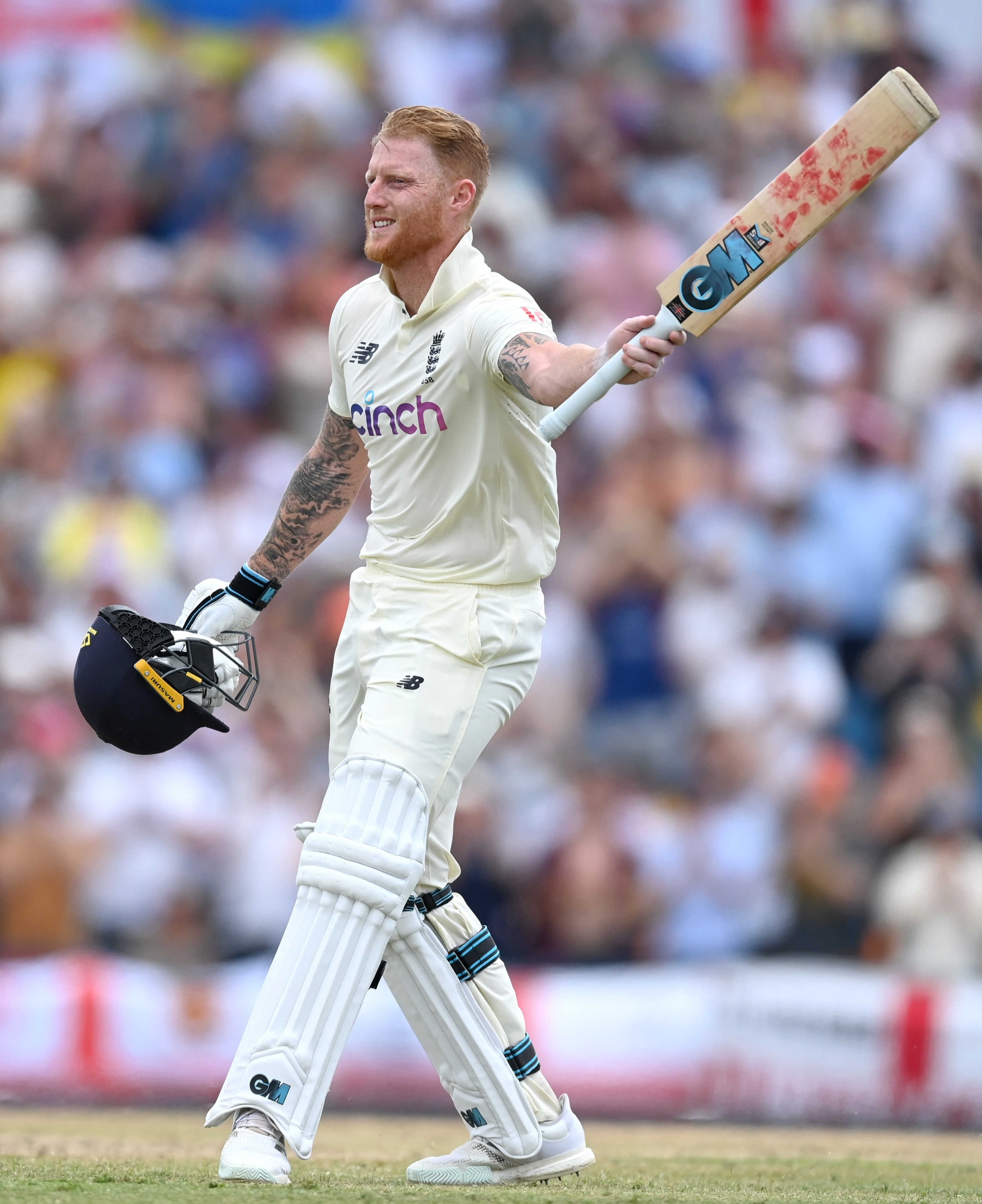 Stokes was finally out for 120, off just 128 ballsCredit: Getty

“This ground, that team, stand to applaud one of the great warriors of world cricket!”

Take a moment to appreciate some of the best shots from Ben Stokes’ sensational century at Kensington Oval 👏#WIvENG pic.twitter.com/kXuwpNjhQK

And with rookie Matt Fisher striking with only his second ball to snare the miserable John Campbell, and the previously placid pitch starting to break up and turn, Joe Root’s men are sniffing only a fourth win in 17 visits to the Kensington Oval.

The Windies closed on 71-1, still 237 adrift of the follow-on mark, England as much in the ascendency at the close as they had been overnight.

While Fisher’s introduction to Test cricket, inducing a bottom-edged nibble through to Ben Foakes, was the highlight of the final session, this was a day dedicated to Stokes.

The hero of Headingley 2019 admitted he had let himself and his team-mates down in Australia.

But he was back to his best from the instant he drilled Jaydon Seales to the long on boundary for his first scoring stroke.

Stokes smashed six sixes and 11 fours in a 128-ball knock that ensured England made the most of their first day domination to all-but ensure they are the only potential winners.

It was vintage, glorious Stokes, breaking the spirit of the bowlers as he launched the ball to all parts, even sending one so far in the direction of central Bridgetown that it did not come back.

Only Sir Garfield Sobers, in 63 Tests, and South Africa’s Jacques Kallis, who needed 10 more, have reached the double of 5,000 runs and 150 wickets quicker than the 78 matches it has taken Stokes.

That is the measure of his talents and status in the game, a player who makes opponents fear him with bat and ball.

Opening his knock with the first delivery of the day, he shared a rapid-fire 129 fourth wicket partnership with Root, who made 153 – the 12th time he has passed 150 in a Test – before succumbing leg before to Kemar Roach after a successful review.

Some of Stokes’ shots were truly breathtaking, that perfect fusion of style, elegance, footwork and pure native power, especially when he decided to hit Veerasammy Permaul out of the attack.

Permaul was smashed over long on twice, looking on in despair as the ball sailed into the distance, and also sent flying beyond the square leg boundary.

Stokes was equally brutal on the seamers when they erred in length, flaying Alzarri Joseph to the fence with one strike of staggering ferocity.

It seemed all too easy, the pitch utterly lifeless, Root and Stokes making it look effortless, the skipper steadily accumulating with risk-free batting until he fell at the start of the afternoon session. 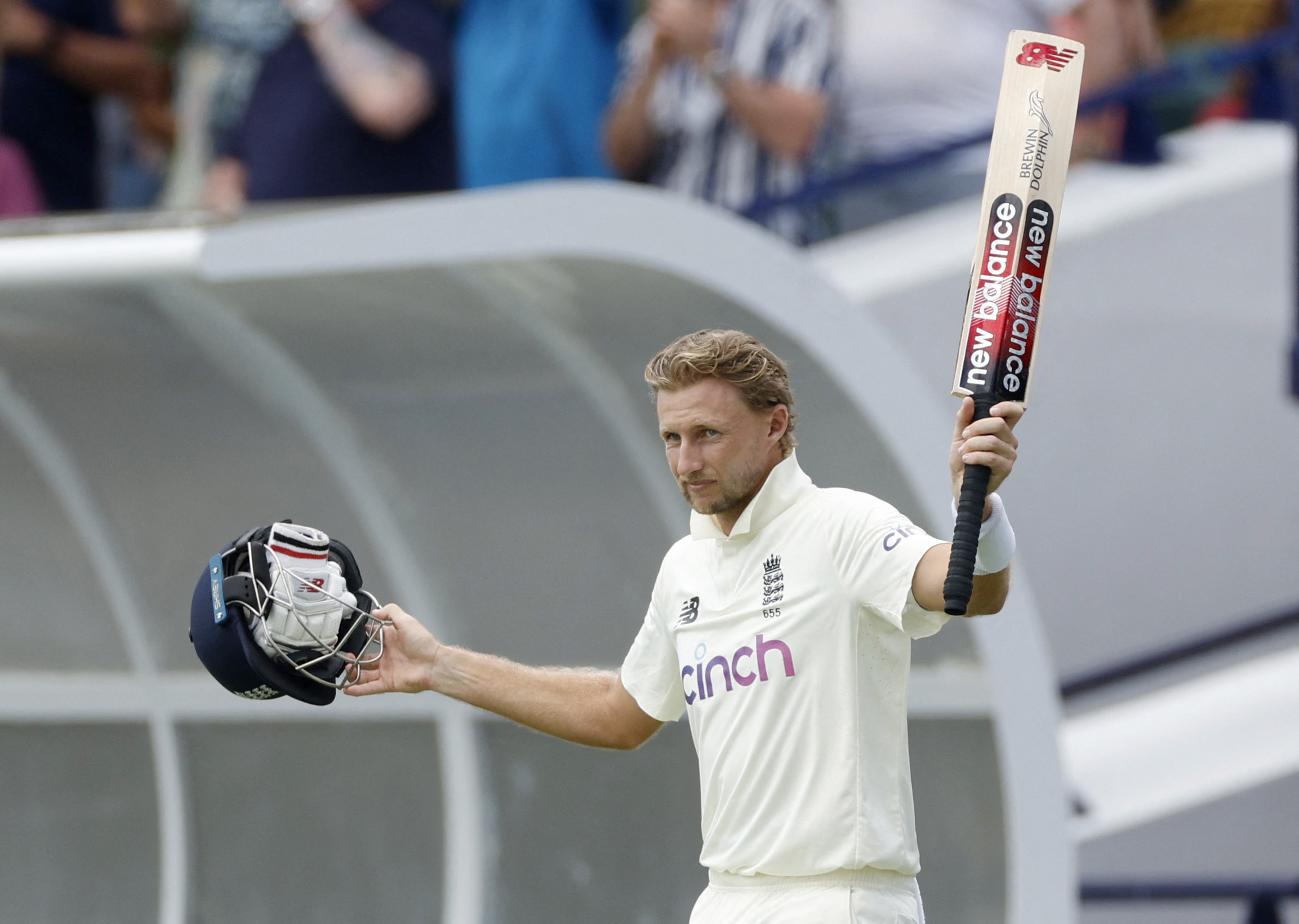 Root scored 153 of his own – a second century in as many TestsCredit: Reuters

More runs followed in tandem with Jonny Bairstow, who struck a brisk 20 before holing out at deep square leg.

Stokes got to three figures, off just 114 balls, with a one-day style drop and run, taking off his helmet and pointing to the heavens in honour of his late father, finally departing for a magnificent 120 seeking a third successive six off Kraigg Brathwaite.

Even then the torture continued as Foakes and Chris Woakes smeared and slashed their way to a stand of 75 before the keeper was stumped – the turn from Permaul will have delighted Jack Leach – with England adding just eight more before the declaration.

That represented England’s eighth highest score in the West Indies and first time they have passed 500 since their win against India in Chennai in February 2021.

It also meant Root could go on the attack, unworried about leaking runs, although Woakes once again took a while to find his line and length.

Not so Yorkshire right-armer Fisher, fenced to the boundary with his first ball but then bagging Campbell with the next and bowling with pace and carry. 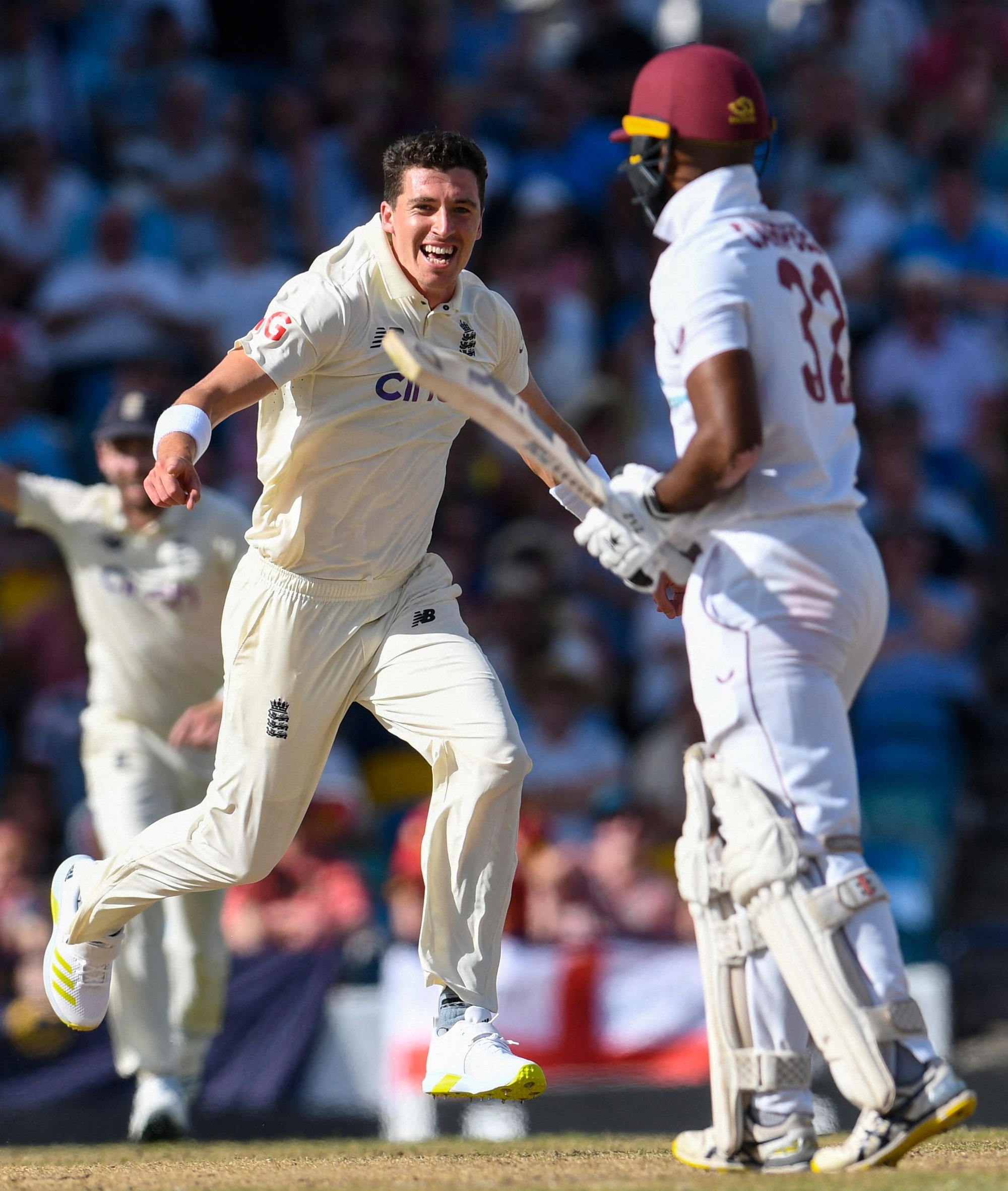 He might have had a second victim as well, although Zak Crawley’s face suggested he knew he had grounded the ball grabbing the edge off Shamarh Brooks, with the score on 41.

Leach, though, was getting grip, rip and bounce, only a thin edge saving Brathwaite when one grubbed through in front of middle.

You never forget your first! 🏏

Matthew Fisher takes the wicket of John Campbell with just the second ball of his Test career.

England will back themselves to take total control on day three.

Speaking on his ton after the day’s play, Stokes said: “It’s the best I’ve felt at the crease for a while.

“You always feel pretty good when you get a hundred but a lot of credit has to go to Joe and Dan for the way they played on Wednesday.

“That set the day up for us and allowed the middle order to go out there and free their arms.

“You’ve got to look at the situation and seize the opportunities when you are so far ahead.

“I thought trying to put pressure onto their bowlers was my option.

“I was thinking ahead and that it would be nice to have a bowl at them after tea with some big runs on the board so that worked out pretty well.

“We know the wicket is pretty good but it’s changed a lot over the last session and a half and we’ve seen a few balls spin and bounce with Leachy.

“The seamers felt they were in the game a lot as well. Some balls were going through the top of the wicket so it will be interesting to see what another day’s cricket does on that.

“They are good signs. Winning the toss, batting first and putting 500 on the board is always good for you.”

ENGLAND tossed away a dream start with another demoralising Ashes performance on day one of the Fifth Test.…
byBizLifetime
No comments

ENGLAND’S collection of left-armers combined to hammer South Africa in the first match of the post-Ben Stokes era.…
byBizLifetime
No comments