MAX VERSTAPPEN admits he had to dive deep into his box of ‘tricks’ to outwit Charles Leclerc in Saudi Arabia.

The reigning world champion, 24, was forced to work hard for his first win of the season thanks to his Ferrari rival.

Verstappen eventually managed to pass Leclerc, also 24, with just four laps of the 50 to go.

But not before a long, tactical battle with the pair trading places over and over again during the controversial race in Jeddah, which took place just days after a terror attack six miles away from the track.

And now, Verstappen has revealed how he finally got past Leclerc to keep up the pressure on the F1 championship leader – with a demoralised Lewis Hamilton down in tenth.

Reflecting on the thrilling finale, Verstappen said: “It was a really tough but good race. 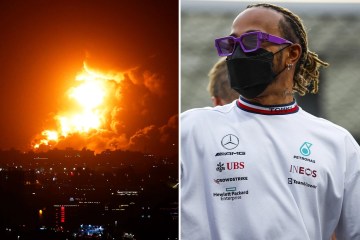 “We were battling hard at the front and we (Red Bull) just tried to play the long game.

“They (Ferrari) were really quick through corners, we were quick on the straight, but the tyres were wearing out quite quick around here.

“You could see at the end we had a bit more pace, so I just tried to get by.

“It wasn’t easy, playing smart tricks in the last corner, but eventually I managed to get ahead.”

Verstappen failed to finish the 2022 season opener in Bahrain with a mechanical problem when seemingly certain to bag a podium spot.

Leclerc ran out winner in that race, with the Ferrari driver still top of the drivers’ championship for now.

The Monegasque racer admitted he was ‘disappointed’ to concede the win to Verstappen.

He said: “It wasn’t enough today, but I really enjoyed that race.

“It is hard racing but fair. And every race should be like this.

“I wanted to win today. Max did a great job.

“I was pushing like I have rarely pushed before, to the absolute limit, but of course there is respect.

“However, I am disappointed.”

Who is F1 star George Russell’s girlfriend Carmen Montero Mundt, how long has she been with the Mercedes driver?

GEORGE RUSSELL has impressed this season as Mercedes’ new F1 superstar. The Brit has put in some sterling…
byBizLifetime
No comments