FORMULA ONE world champion Max Verstappen has hinted that his late retirement from Sunday’s Bahrain GP could cost him the title.

The flying Dutchman was on course for a second place finish in the F1 season opener before suddenly losing power in the closing stages.

Verstappen walked away from his car in disgust after retiring from the Bahrain GPCredit: AFP

That saw Charles Leclerc and Carlos Sainz secured a Ferrari one-two, with Lewis Hamilton finishing in an unlikely third after Verstappen’s collapse.

Verstappen controversially beat Hamilton to last year’s title by just eight points, and the 24-year-old has hinted a zero point start to the campaign could cost him come the business end of the season.

After losing early ground to his rivals, he said: “To lose so many points for the team is also very disappointing, because for the championship where sometimes it can be really tight until the end, these are very important points.”

Verstappen’s team-mate Sergio Perez also didn’t finish the race in what ended up being a nightmare weekend for Red Bull. 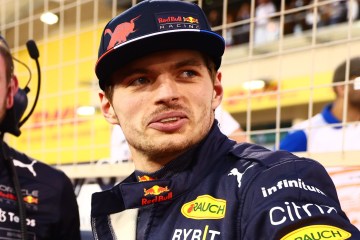 Perez raced on after Verstappen retired, but spun out on the LAST lap while in third position to gift Hamilton a miracle podium.

The result left Verstappen furious with his team, with the driver blasting “At this level, it shouldn’t happen,” following the two late retirements.

Verstappen also went on to claim he had difficulty steering his car throughout the race before the suspected fuel pump issue that ended his day prematurely.

He said: “I mean, what happened at the end is obviously very frustrating, but of course before that, quite a few issues.

“First of all the balance was off. I didn’t have the same feeling as on Friday on the long runs, so that was a bit disappointing.

“Then suddenly my steering, I don’t know what happened to that, it was just completely locked and the faster I was going, I could barely steer.

“So it was not easy on the restart to defend from Carlos [Sainz].

“But then I was still in second with that big issue so you think, okay, with all these issues that I’ve had today, second would be a good result.”

But then Verstappen’s race was dramatically cut short just three laps before the chequered flag.

He concluded: “And then suddenly I had to retire, everything just switched off. It looked like a fuel pump or issue, there was no fuel coming to the engine.

“Of course these things, you don’t want them to happen and it’s very painful for the team as well that both cars retired. We need to look into everything.”

MAX VERSTAPPEN says he’s buried the hatchet with Sky F1 and has dropped his boycott of the broadcaster.…
byBizLifetime
No comments

RALF SCHUMACHER has brutally claimed he “can’t imagine” Daniel Ricciardo will see another season in Formula One. The…
byBizLifetime
No comments

LEWIS HAMILTON will meet with NFL legend Tom Brady in America next week, where you can be sure…
byBizLifetime
No comments