LEWIS HAMILTON has admitted to fans he is “struggling mentally and emotionally” in a worrying social media post.

The 37-year-old F1 star revealed he is in a “constant effort to keep going”.

After a difficult start to the season, which included a 10th place finish in Saudi Arabia last weekend, Hamilton has opened up on his mental struggles.

But the Brit admitted he has been suffering “for a long time”.

The seven-time world champion wrote on his Instagram story: “It has been such a tough year already with everything that is happening around us. Hard some days to stay positive.

“I have struggled mentally and emotionally for a long time, to keep going is a constant effort but we have to keep fighting. We have so much to do and to achieve.” 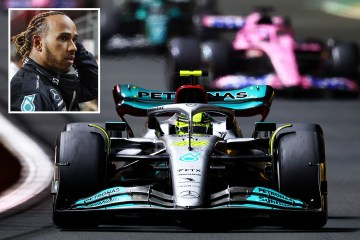 Hamilton continued by reassuring fans that there is nothing wrong with the different emotions that people go through, and they are “not alone”.

He added: “I am writing to tell you it is OK to to feel the way you do, just know that you are not alone and that we are going to get through this.

“Let’s remember to live in gratitude for another day to rise. Sending you love and light.”

Hamilton was thought to be one of those strongly in favour of cancelling the race after a missile attack on an oil depot just 10 miles from the circuit.

He said on Sunday: “I am so happy the weekend is done.

“I am so happy that everyone is safe, I am just looking forward to getting out. I just want to go home.”

Hamilton has struggled for pace in a disappointing start to the F1 campaign, with Mercedes unable to challenge Ferrari and Red Bull in the opening two races of the 2022 calendar.

And the quest for a record eighth world title looks unlikely to come to an end this campaign.

‘Is my car on fire?’ – Max Verstappen smells fumes from huge blaze 12 miles away during Saudi Arabia GP practice

A TERRORIST attack has rocked the Saudi Arabia Grand Prix just miles away from the Jeddah circuit. The…
byBizLifetime
No comments