The Dutch tactician, 52, appears to be the favourite for the Red Devils hot-seat to take over from Ralf Rangnick.

British journalists have been banned from Erik ten Hag’s next press conferenceCredit: Getty

However, the two clubs still have to agree a compensation package – believed to be around £1.6million.

It is highly likely that the move will be confirmed before the end of the season.

It means that ten Hag is set to beat Mauricio Pochettino to the punch for the top job.

Despite that, Ajax are unhappy with the speculation linking their manager with a move elsewhere. 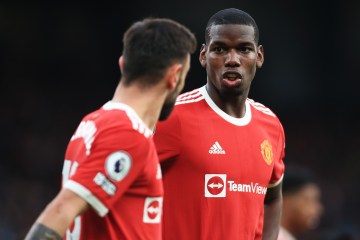 And they want to limit the questions about his future in their press conferences, as they battle to remain top of the Eredivisie with a crucial game against Sparta Rotterdam.

So they’ve taken the steps of banning the English press to avoid any potential distractions.

Sky Sports News reporter Gary Cotterill, via The Express, said: “As Ten Hag was preparing his team to face Sparta Rotterdam, the media team were busily rejecting the applications from the English media to attend the post-match news conference. There will be no radio, no newspapers, no Sky Sports News.

“They don’t want him asked, in English, about Manchester United. His English isn’t that great, either.

“Ajax say he needs to concentrate on winning another [Eredivisie] title. It’s by no means a given – they’re only four points ahead [of PSV] with six games to play.

“It is a bit worrying that he is not doing any [English] media duties tomorrow because maybe he doesn’t want to answer any difficult questions.

“But if he is to become the Manchester United manager then he is going to have to get used to answering tricky questions twice, sometimes even three times, a week. That could be something for Manchester United fans to worry about.”