‘I feel at home at Arsenal’

ARSENAL defender Gabriel Magalhães has given the club a major boost by reaffirming his happiness in London amid interest from Barcelona.

Reports from Spain cast doubt on the 24-year-old’s future when it was revealed Barcelona wanted to sign him.

Gabriel has been a key player for Arsenal this season.Credit: Getty

However, the Brazilian has revealed he feels at home with the Gunners.

Speaking to Premier League Productions via the Evening Standard, he said: “It’s been a real challenge here and I am more and more settled every day.

“At the same time, we know we all can’t be perfect in every match. We do make mistakes.

“But I feel good, I feel at home at Arsenal. It’s a great squad to be a part of and together I am sure we can achieve a lot. I am very happy here.” 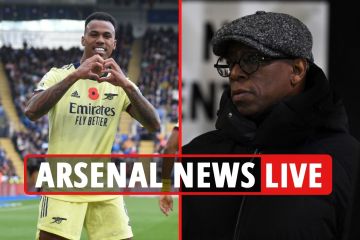 Gabriel has appeared 31 times this season for Mikel Arteta’s side, forming a strong partnership with £50m summer signing Ben White.

The centre-back is often the more combative and abrasive of the two, which perfectly complements White’s more refined style.

He has also managed an 89.4 per cent pass completion showcasing his technical side – on top of the added factor of being left-footed.

Spanish outlet Sport reported earlier this week that Barcelona were prepared to offer a number of players in an exchange deal for him.

Memphis is the standout option here considering Arsenal look set to lose their only two strikers, Alexandre Lacazette and Eddie Nketiah, when their contracts expire this summer.

The Dutchman joined Barcelona on a free transfer last summer, but has struggled to cement his place in the team following the managerial appointment of club legend Xavi in November.

The Bluagrana are eyeing up defensive players to replace veteran Gerard Pique and injury-prone Samuel Umtiti and Clement Lenglet.