IT is hard to believe that Jude Bellingham is still only 18-years-old.

Because the Dortmund midfielder is already running the show at international level and proving that he is going to be an England superstar way beyond this year’s World Cup finals in Qatar.

Jude Bellingham has shown he must be an automatic start for England at the World CupCredit: Getty

In fact there’s a fair chance he could still be the country’s main man in 2030 if he can maintain his current extraordinary rate of progress.

And any lingering doubts Gareth Southgate might have harboured about Bellingham’s readiness for a starting role in his team have surely been dispelled after this five-star Wembley showing.

Now the question must be who the England boss leaves out to accommodate the teenager’s presence going forward.

Because not since Wayne Rooney first burst onto the international scene all those years ago have we had a talent as bright as this. 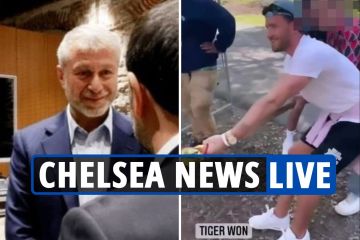 The poor old Ivorians certainly didn’t know if they were coming or going as Bellingham ran them ragged last night.

He was only denied his first senior international goal by the width of the goalpost when his 15th minute shot deflected off the leg of keeper Badra Ali Sangare.

And he was convinced he had won his team a penalty right at the start of the second-half when he was sent flying in the box.

Referee Erik Lambrechts was equally certain a foul had been committed until the TV monitor at the side of the pitch showed that Fousseny Coulibaly had just got a toe-end to the ball before he clattered into Bellingham.

But nothing was going to spoil the kid’s big night out as he covered every blade of the Wembley turf to keep England’s winning streak going.

That task was certainly made easier when the visitors were reduced to ten men by the brainless Serge Aurier receiving his second yellow card of the evening.

Yet even before Aurier’s premature departure Bellingham had been pulling all the strings on the left side of England’s three-man midfield.

His connection with Jack Grealish was a constant source of encouragement for Southgate, who certainly would have preferred to see his team playing against a full complement of opponents for the entire 90 minutes.

And nothing the England boss saw of Bellingham last night would have come as any kind of surprise.

Because he has known for years that this kid is something special and it has always been a question of when and not if Bellingham was going to be let off the leash.

His close control, range of passing, vision and tireless running are all top notch.

And he made it very clear that he was not going to be intimidated by the Ivorians’ industrial approach as they flew into the tackle with malicious intent.

On a couple of occasions he squared up to his assailants and had to be hauled away by team-mates before he got himself into trouble with the fussy Belgian ref.

But there is nothing wrong with a bit of spikiness as long as it’s kept under control and his Dortmund coach Marco Rose has actually encouraged his young prodigy to take no nonsense from anyone.

Rose is even more delighted with Bellingham’s declaration that he has no intention of leaving Dortmund this summer even though every club in the Premier League would kill for his signature.

Luckily for Southgate he doesn’t have to worry where Bellingham is plying his trade next season.

Because whoever he is playing for, he is definitely going to be on that plane to Qatar.

CHELSEA are reportedly keen on signing Juventus defender Matthijs de Ligt. The Blues are desperate for reinforcements at…
byBizLifetime
No comments

HANDS up again all those who still think Cristiano Ronaldo is the problem. If it wasn’t for the…
byBizLifetime
No comments

When is the Mo Farah documentary, what time is it, what TV channel & live stream is it on?