Wayne Rooney wants to stay on as Derby boss next season, according to Chris KirchnerCredit: PA

The administrators picked Kirchner ahead of ex-Newcastle United owner Mike Ashley – but the takeover has yet to go through.

If all goes to plan, Kirchner says Rooney will stay and the pair will put together a plan to get the Rams back on track.

That looks likely to be from League One with the Rams nine points from safety with five games to go.

Kirchner plans to be at Friday night’s game with Fulham – and confirmed on Twitter that Rooney will be on board at Pride Park next season. 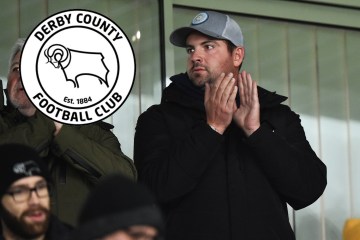 He tweeted: “Rooney told me he’s staying. We’re going to do this together. Excited to rebuild this with him.”

Rooney made it clear last week he had no plans to exit Derby – insisting that he would not be planning for next season if he were about to leave.

Kirchner spoke to the Rams boss earlier this season – before initially withdrawing his interest and targeting Preston North End instead.

But he came back in after abandoning plans to move in at Deepdale.

Rooney was clearly keen for Kirchner to get the nod from Derby’s administrators though.

Another figure likely to be involved in the takeover is ex-Manchester City chief executive Garry Cook.

Kirchner has made clear that Cook is in line for a similar role at Pride Pride if the takeover goes through.

Cook was at Derby in November with Paul Stretford – Rooney’s agent – for the match with QPR.

It was Cook who helped secure Sheikh Mansour’s £210 million takeover of Manchester City in 2008.

Kirchner tweeted: “No secret I’ve been with Garry through all of this. I have yet to meet a better business mind in football than Garry.”

‘First night and look at the state of him’

EX-MANCHESTER CITY stars Micah Richards and Joe Hart have been pictured during a boozy night out in Ibiza.…
byBizLifetime
No comments

TOTTENHAM ace Oliver Skipp has been ruled out for the rest of the season due to injury. Spurs…
byBizLifetime
No comments