MARCUS RASHFORD has become the youngest player to reach 200 Premier League appearances for Manchester United following his start against Everton on Saturday.

Red Devils legend Ryan Giggs previously held the record, having notched a double century of caps at the age of 24 years and 290 days.

Marcus Rashford has now made 200 Premier League appearances since his debut in 2016Credit: EPA

But Rashford, 24, has managed to reach the feat 135 days sooner after returning to Ralf Rangnick‘s starting line-up against the Toffees.

His record-breaking appearance was ultimately a day to forget for United, who significantly dampened their Champions League hopes following a 1-0 defeat at Goodison Park.

The England international did not start in either of United’s last two matches against Atletico Madrid and Leicester, but was called upon as a substitute on both occasions.

Rangnick made six changes against Everton from the side that drew with Leicester, opting for Rashford, Cristiano Ronaldo and Jadon Sancho in a front three. 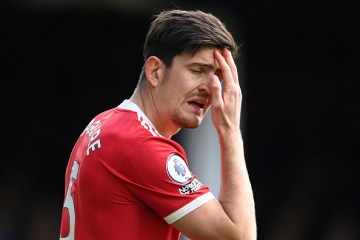 Although Rashford has been a stalwart at Man United since breaking on to the scene under Louis van Gaal in February 2016, he is set for his worst season since 2016/17 in terms of appearances.

The start against Everton was only his 21st Premier League appearance of the 2021/22 campaign, and he has only contributed four goals in that time.

By contrast, the academy graduate has managed at least 30 appearances in each of the last five seasons, with a best return of 17 goals in 2019/20.

Although Rashford’s future at Old Trafford is seemingly unclear – and he may well leave the club in the summer for new pastures – the winger would leave Old Trafford a record-breaker.

Throughout Giggs’ illustrious career, he accrued a total of 109 goals and 164 assists in the competition.

ERLING HAALAND trained with his Manchester City team-mates for the first time since his transfer. The striker, 21,…
byBizLifetime
No comments

BURNLEY have finally confirmed Manchester City legend Vincent Kompany as their new manager. The 36-year-old has been heavily…
byBizLifetime
No comments