WHAT a remarkable way to bring up a century for Manchester City.

In their 100th game in the Champions League they clinched a semi-final spot for only the third time in their history.

Man City are into the Champions League semi-finalCredit: Getty 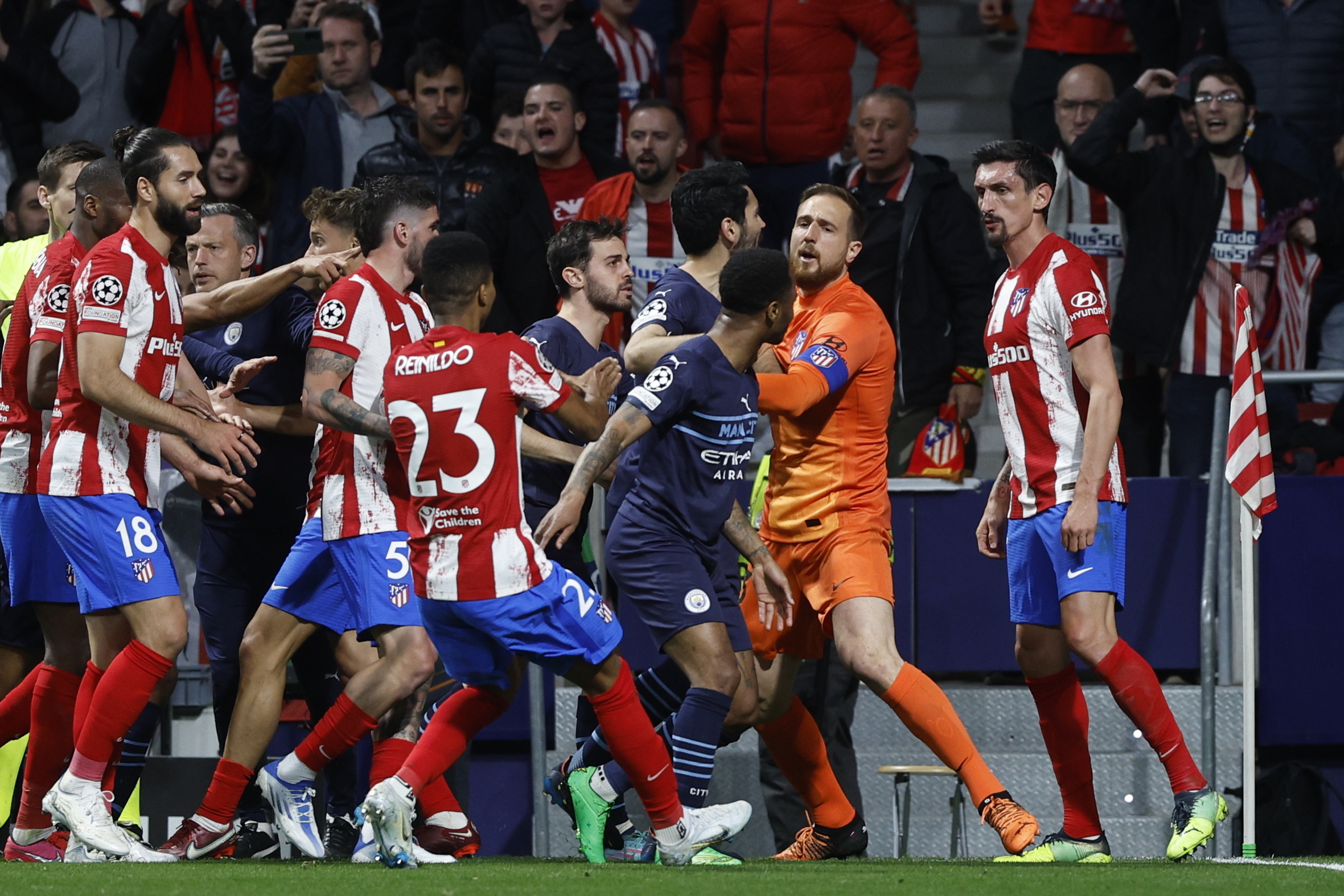 They survived a bruising clash with Atletico Madrid to reach the last fourCredit: EPA 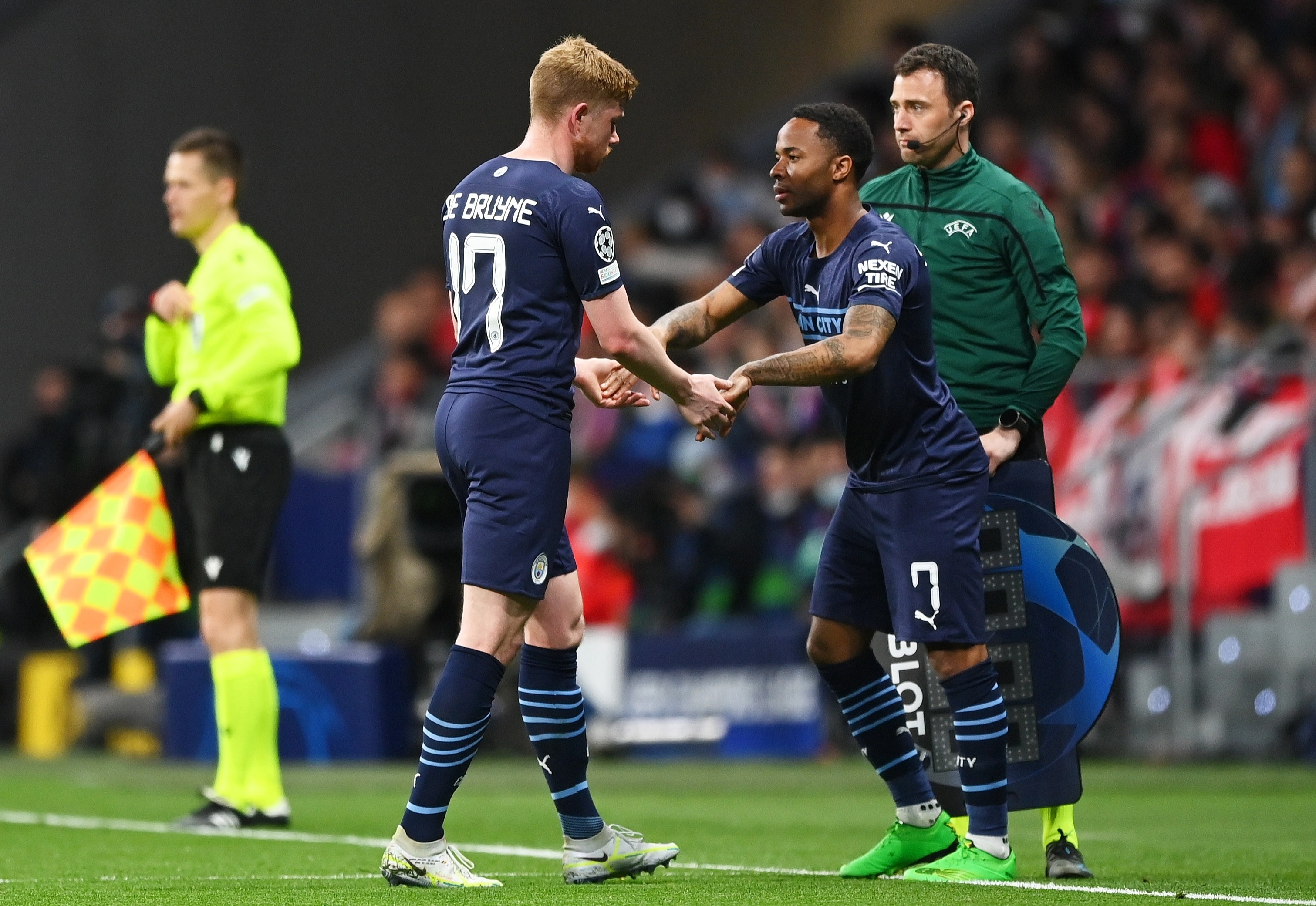 Kevin De Bruyne limped off and will be a doubt for the FA Cup clash with LiverpoolCredit: Getty 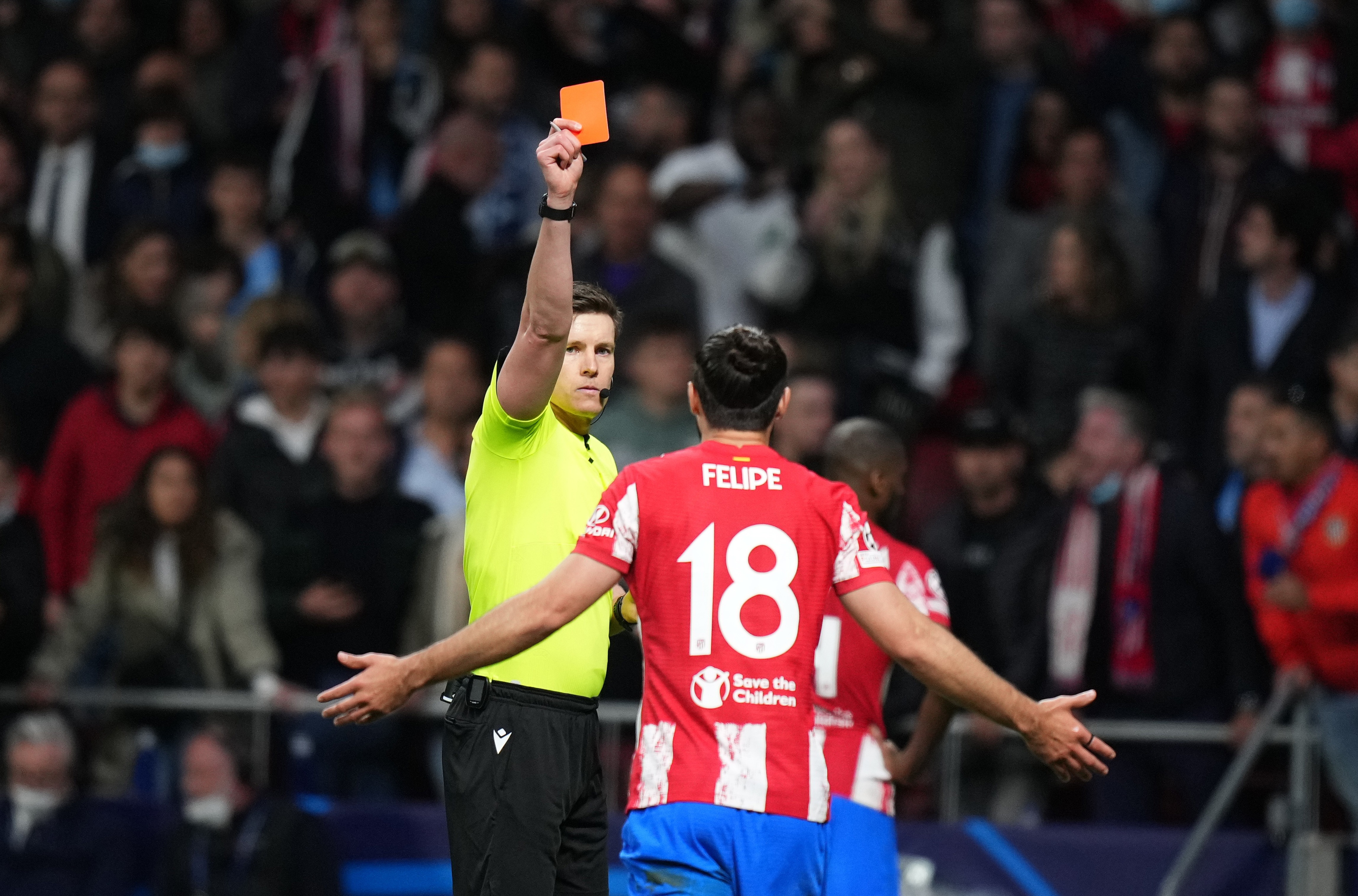 Felipe was sent-off late on as tensions boiled overCredit: Getty

But talk about going through the nervous nineties before they got there.

In the feverish and chaotic Wanda Metropolitano, Pep Guardiola’s men were given a stern examination as Atletico Madrid finally started to play in the second half.

City’s defensive wall – which has now conceded seven clean sheets in eight away matches in all comps – stood firm with John Stones and Aymeric Laporte magnificent.

And in the end Kevin de Bruyne’s first leg goal proved to be enough. 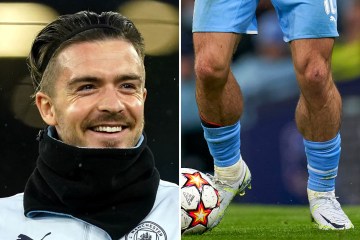 The victory may have come at a cost with KdB and Kyle Walker both limping off in the second half.

But City will be back in Madrid in three weeks time to face the European kings Real – just as they did in this stage six years ago.

And this time they will be the favourites to go through.

Atletico had successfully appealed UEFA’s decision to partially close their stadium over the discriminatory behaviour of their fans in the first leg.

That meant more than 5000 fans who were initially going to be locked out were allowed back in at the last minute.

So the Wanda was a sea of colour and noise by the time the teams emerged.

Yet they have not won any of their last seven European ties at home before this – and had to change that if they were to book a Madrid ‘derby’ in the last four against Real Madrid.

Diego Simeone’s men failed to register a shot on target or win a corner in their ultra-defensive display at the Etihad eight days earlier.

Yet they were a different proposition on their own patch – although the visitors started confidently.

City’s stand in skipper Ilkay Gundogan curled a long range effort wide before a golden chance fell to John Stones – but he headed over de Bruyne’s corner from six yards out.

Guardiola had spoken about his players keeping their heads and making sure 11 men stay on the park for the 90 minutes.

Yet he and several others on his bench were incensed when Felipe led with his arm into the back of Phil Foden’s head.

After a few minutes of treatment and a fair amount of blood, the England youngster was eventually allowed to continue with a bandage wrapped around his head. 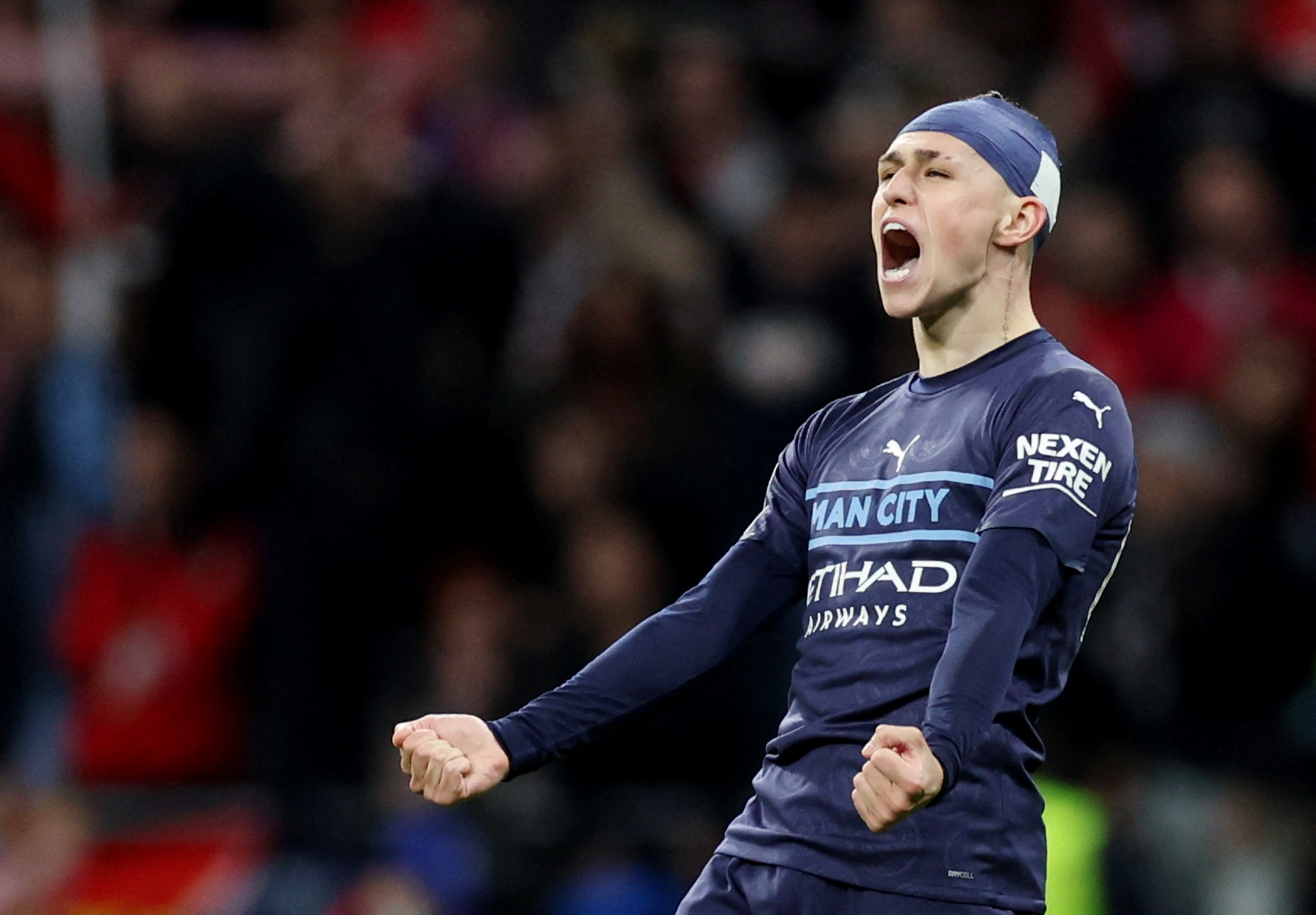 After several minutes of treatment he was allowed to continue with a bandage round his head.

Towards the break he was shoved over the advertising boards by former City defender Stefan Savic.

It seemed like the 21-year-old was being targeted by the home side in the same way Jack Grealish got the treatment in the first leg.

Felipe was finally booked for a late and cynical foul on De Bruyne. The Brazilian seemed surprised when the yellow card was brandished – but shouldn’t have been.

City were beginning to find some spaces and KdB saw a shot deflected wide after Foden’s effort had been blocked.

Their best chance of the opening half came when Riyad Mahrez opened up the home defence with a delightful ball to Kyle Walker.

His cross to the back post was nudged back by Foden and Gundogan fired a low shot against the post when he should really have scored.

At the other end, Geoffrey Kondogbia’s deflected effort gave Ederson a save to make down to his left. 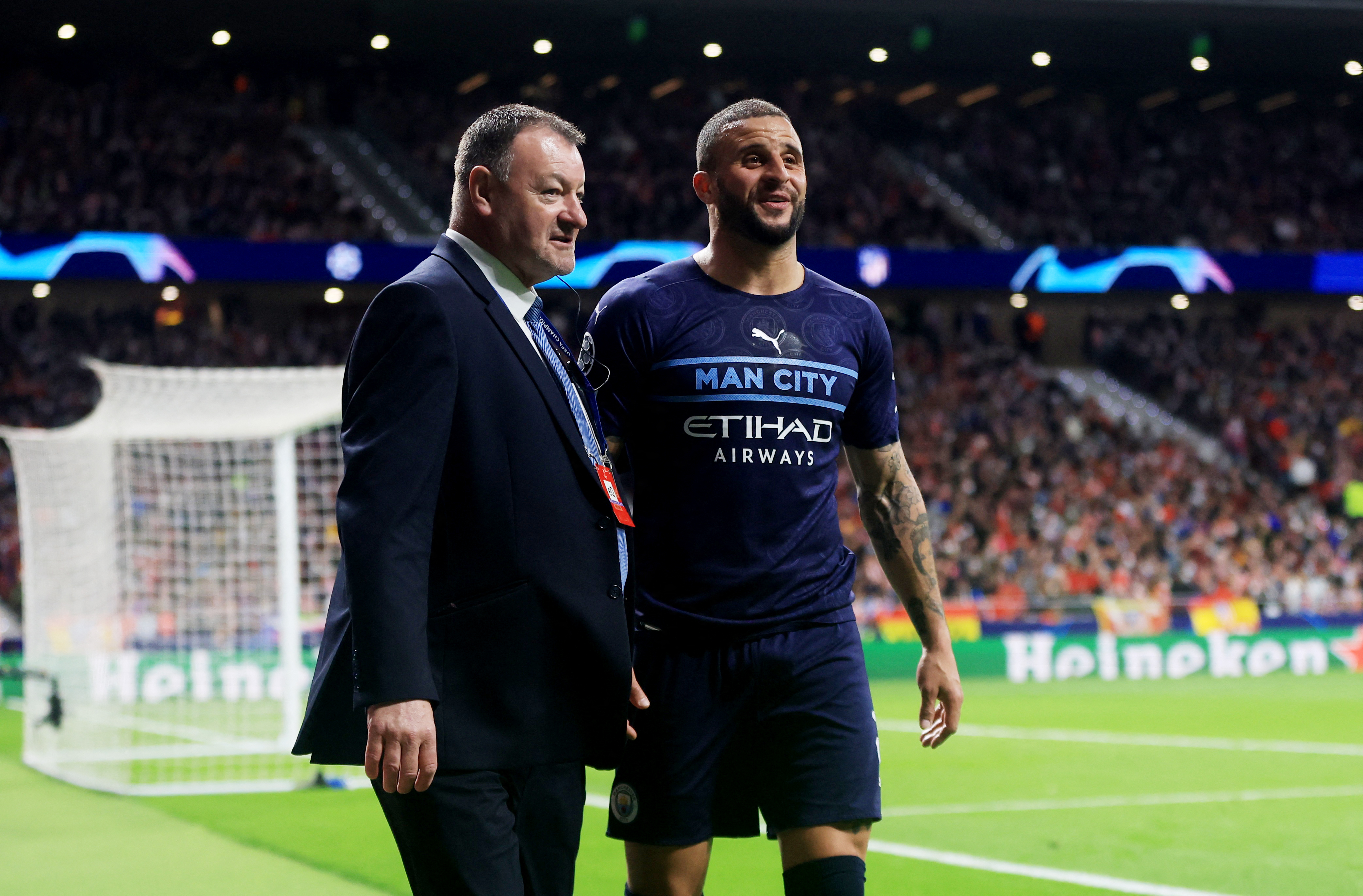 Kyle Walker was also forced off during the bad-tempered clashCredit: Reuters

That was a significant moment – as125 minutes into this tie the Spanish side had finally recorded an effort on target.

Guardiola would have been happy with his team’s first half display – but mindful they were still only one goal ahead overall.

At the break, his team had gone 335 minutes without conceding a goal in this competition – a run stretching back to a dead rubber against RB Leipzig in December.

Foden emerged for the second half wearing a bandage more in keeping with his team’s navy blue away kit.

But Atletico were finally having a real go at City with Joao Felix heading a steepling cross from Renan Lodi just wide.

For the first time in the whole tie, City were under some serious pressure. 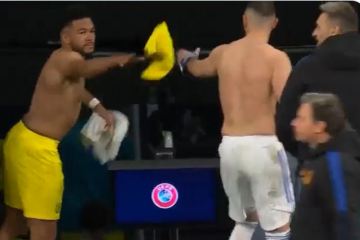 To add to their problems, star man De Bruyne appeared to be hobbling as he was replaced by Raheem Sterling midway through the second half.

He had his right calf strapped up on the bench within a couple of minutes – and that will be a worry for Guardiola.

Atleti’s sub Rodrigo de Paul had a shot with his first touch but was off target – however the home crowd sensed something was on for them.

For the first time in a long time, Guardiola’s men were looking ragged.

Felipe left yet another one on Foden with his trailing leg – and received a second yellow card that was very much deserved.

The angry reaction of Savic sparked a huge melee which the German ref had to somehow sort before finally giving a furious Felipe his marching orders.

Sub Yannick Carrasco forced a flying save from Ederson with a late free-kick and City just about held on.

FIRST came the 7 o’clock protest by hundreds of fans, complete with the usual red and yellow smoke…
byBizLifetime
No comments

MANCHESTER UNITED will NOT sign ten players this summer as previously suggested by Ralf Rangnick, according to reports.…
byBizLifetime
No comments