THIS is what West Ham fans were promised.

The club, and their sunburnt fans, into their first European semi-final since 1976 and back on the map. 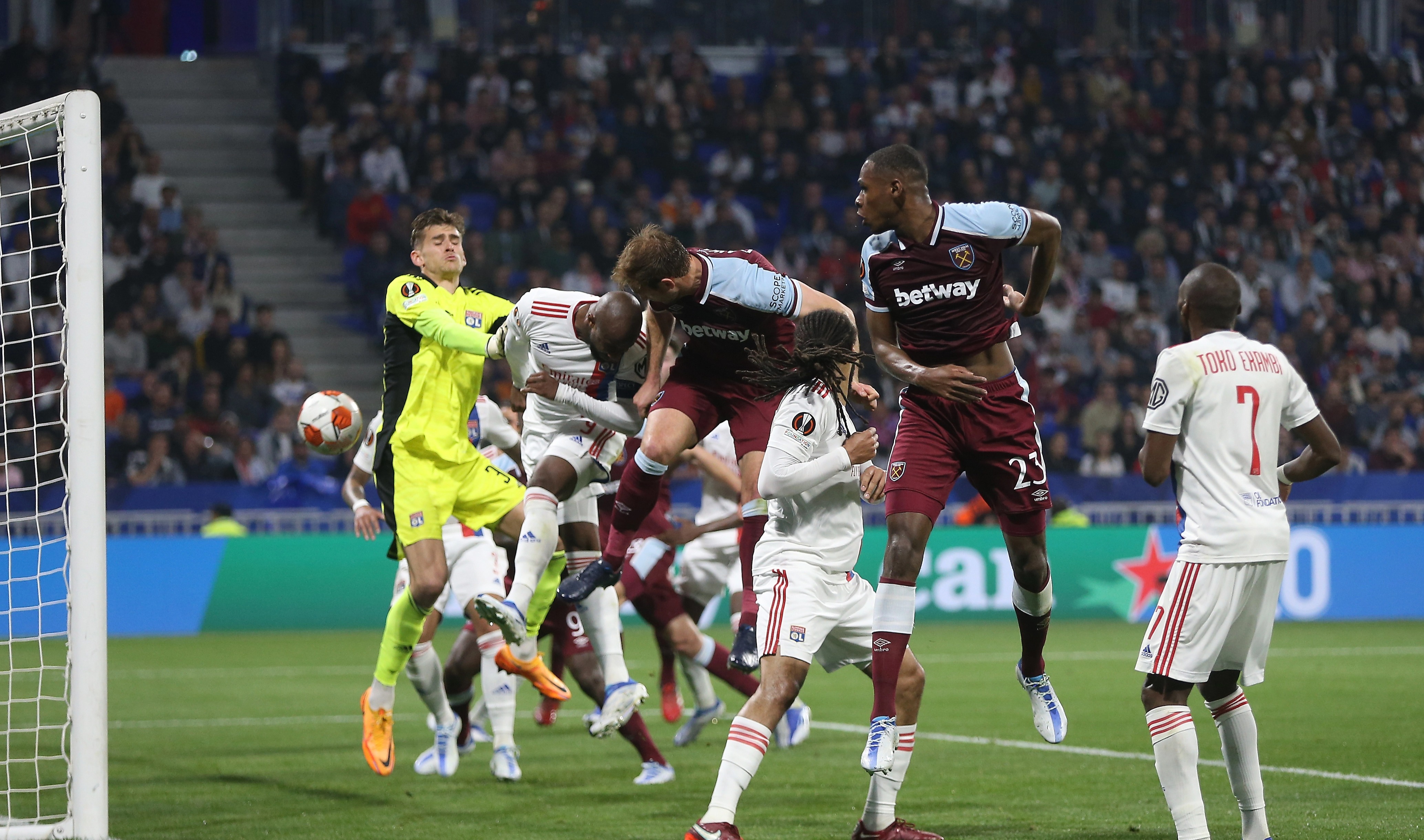 Craig Dawson headed them ahead in Lyon just after the half hour markCredit: Getty 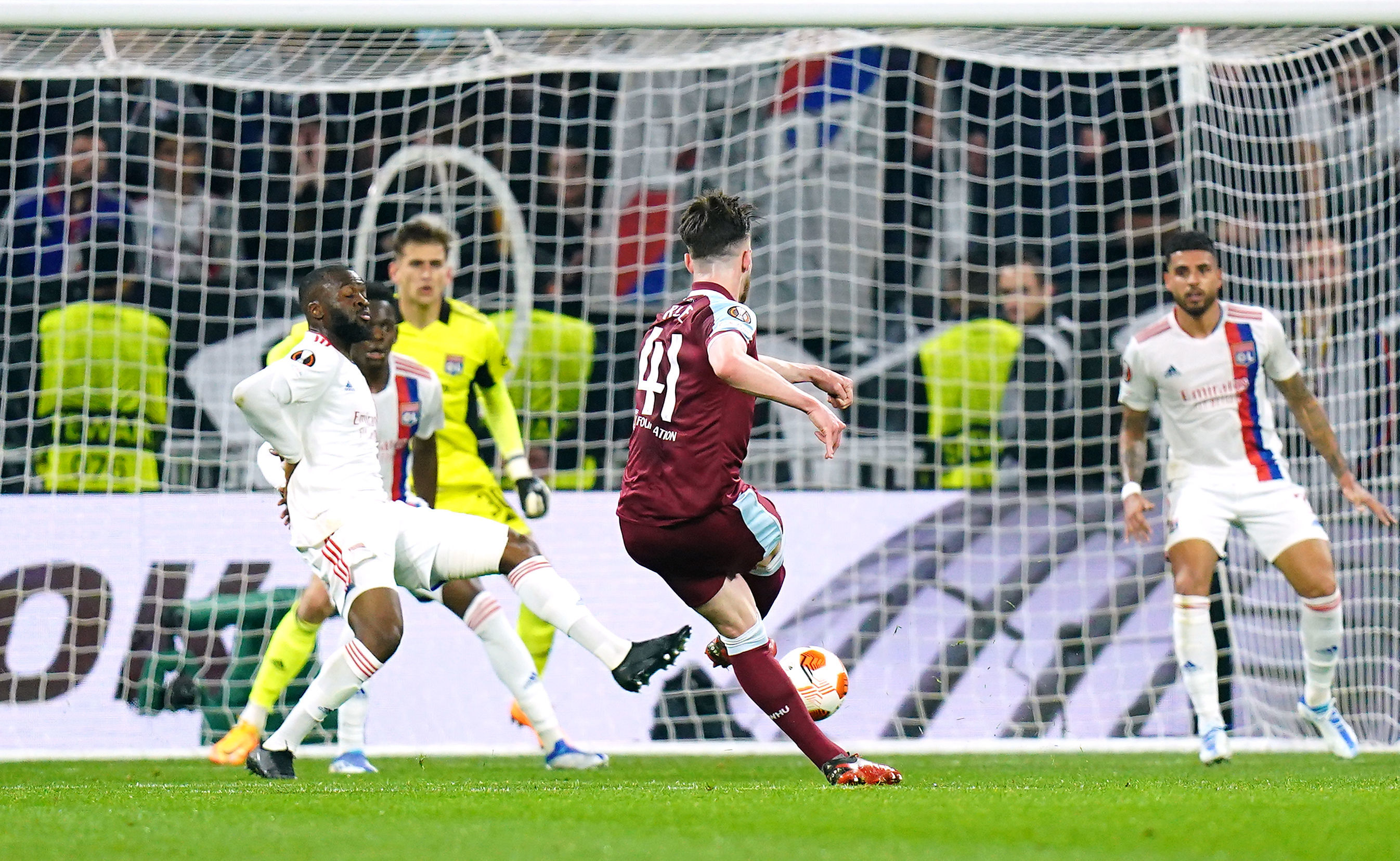 Declan Rice then doubled their advantage moments before he breakCredit: PA 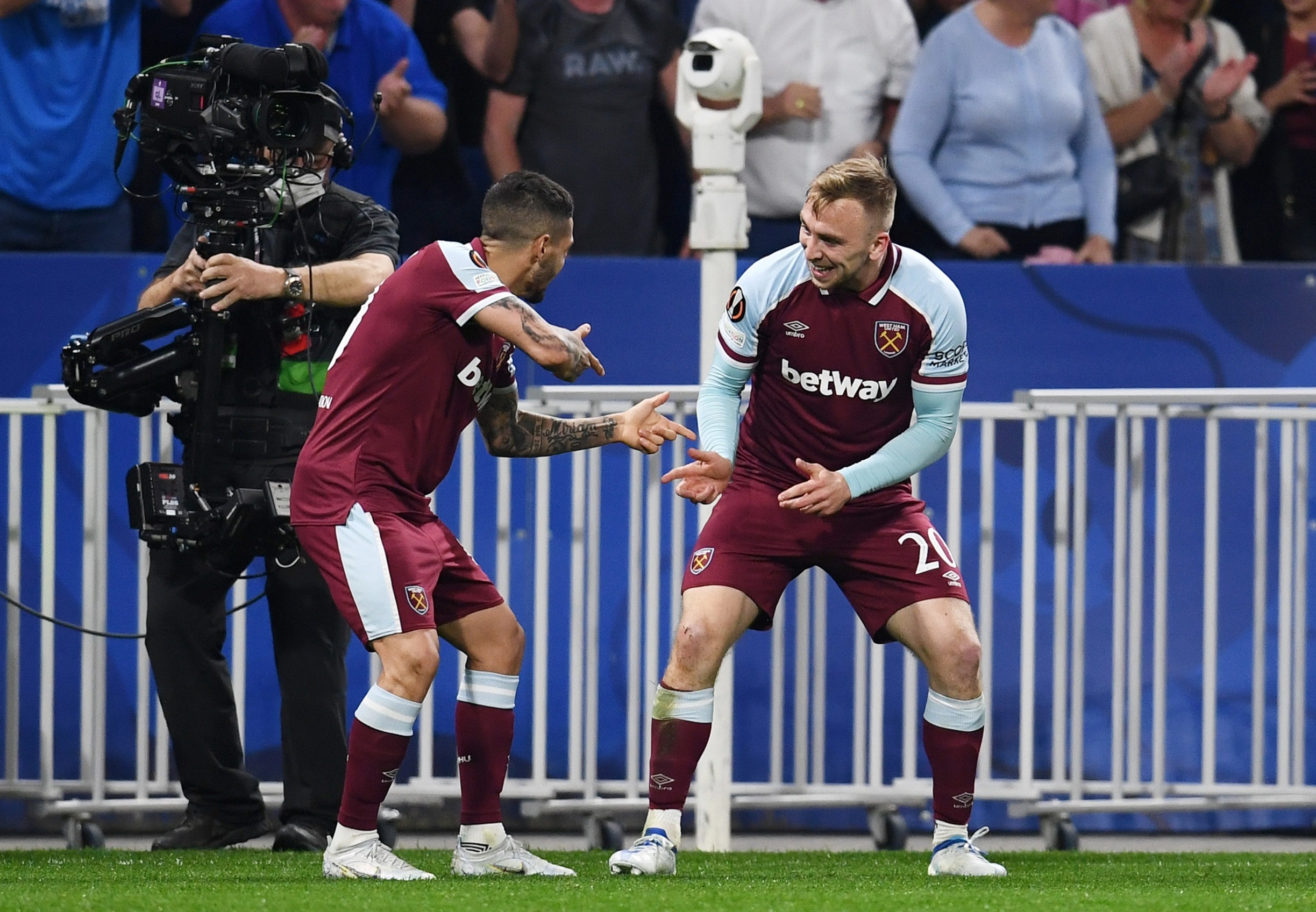 Jarrod Bowen then knocked the stuffing right out of Lyon with the thirdCredit: Getty

After they were stripped of their spiritual home Upton Park for the London Stadium in 2016, co-chairman David Gold said there was no reason why they could not play in the Champions League within five years.

It was a pledge that backfired, as supporters used it against him during three seasons of relegation battles. 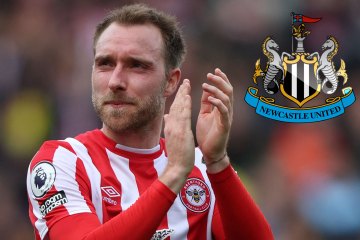 Now the club are heading on the right track with a glittering semi-final up next against Eintracht Frankfurt.

It is 46 years since they last reached a European semi-final, which was also against the German side.

It is the ultimate opportunity for the Hammers to tell the world they are serious about competing at this level.

But also to book a spot in the Champions League with their top-four push in the Prem looking a stretch.

Some Irons fans visited Lyon Cathedral to pray to Saint-Jean-Baptiste for a Hammers miracle before the match.

You couldn’t exactly blame them with the odds stacked against them, particularly in defence.

They were without Aaron Cresswell after the influential left-back was controversially sent off during the 1-1 first leg draw.

Matters were made worse when Zouma did not travel to France after twisting his ankle against Brentford last Sunday while Angelo Ogbonna is out long term.

The shirtless Lyon ultras were in full force with flares, fireworks, flags, drumming and chanting in megaphones to drown out any of the visiting fans who were turfed up into the gods.

So it was no surprise that Peter Bosz’s side started brightly.

Cameroonian handful Karl Toko Ekambi cut in from the right and rattled a rasping shot beyond Alphonse Areola and off the post.

Malo Gusto had Ben Johnson in the palm of his hands in the opening stages.

He whipped in a fearsome cross which dropped to Moussa Dembele but Coufal and Craig Dawson desperately scrapped on the line to keep it out.

But the Hammers held their nerve and bubbled back into things nicely. 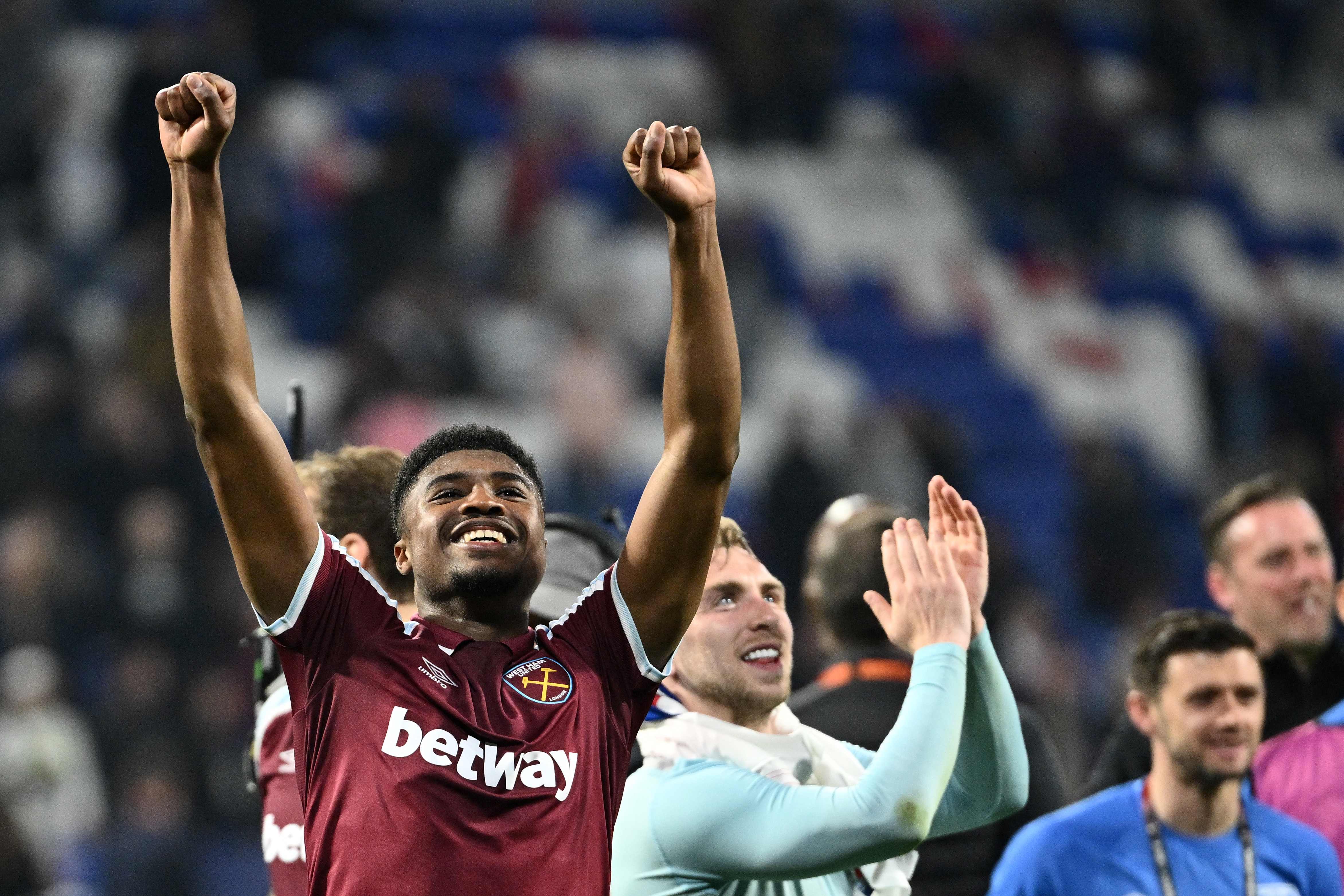 West Ham now have a clash with Frankfurt to look forward toCredit: AFP

Michail Antonio wriggled into the area, teed up Bowen but he failed to steer his volley on target.

Another Bowen deflected shot looked to be sailing in but it spun wide for a corner to a chorus of piercing Lyon boos.

But hero Dawson well and truly shut them up on 37 minutes.

Pablo Fornals curled in the delivery and the defender timed his run perfectly to nod the opener past Julian Pollersbeck at the near post.

It’s no surprise visiting fans strutted around the French city with a sign with the words ‘Ballon D’orson’ ahead of the game.

His busted hooter and goal last night has been the shining symbol that has led the Hammers’ push for European glory.

The Irons were flying after that Johnson steamed down the left and fired in a cross that was headed away but only as far as Rice.

He took an ice-cool touch and cracked in the second thanks to a slight deflection one minute before the break. 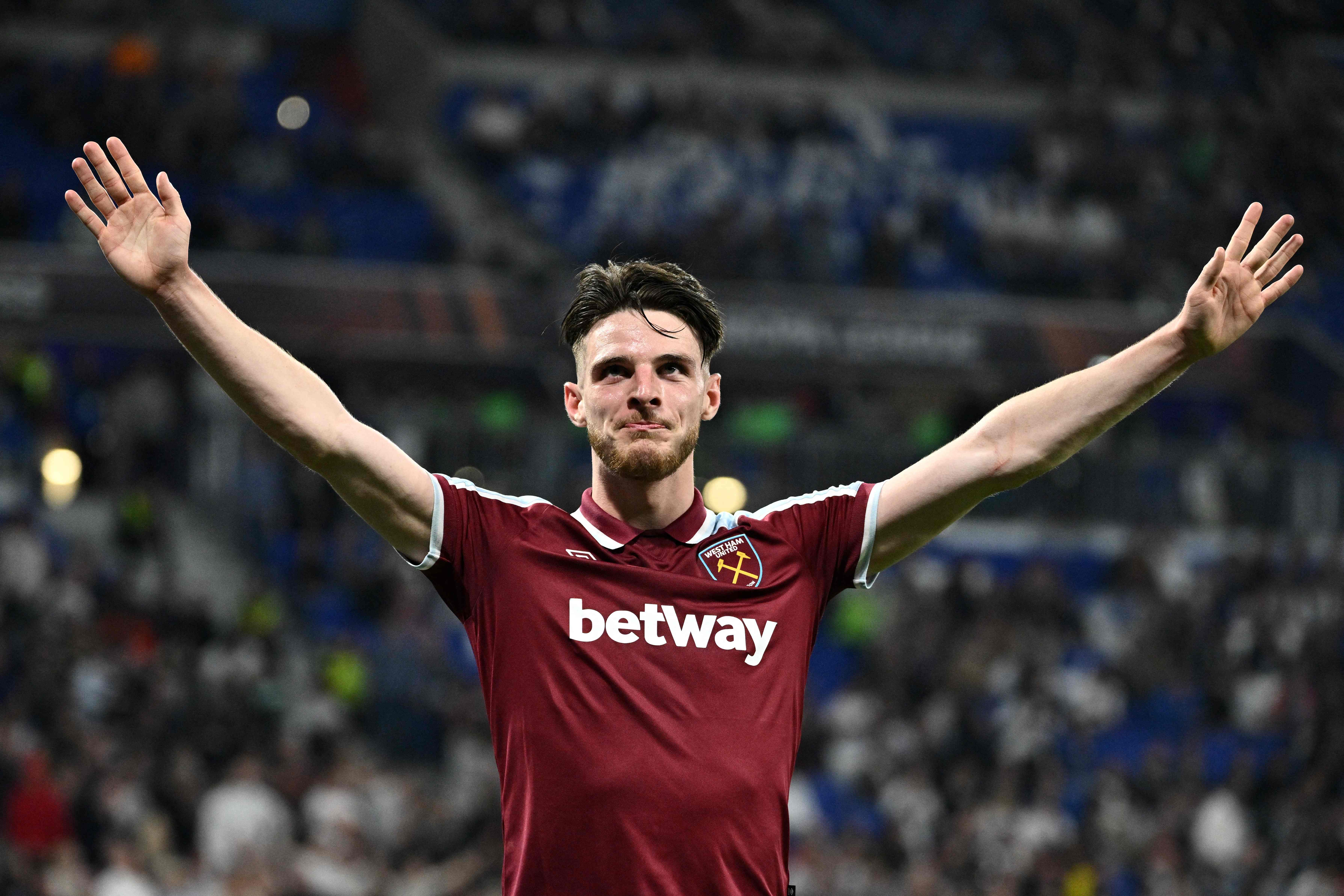 Declan Rice was superb as the Hammers romped to victoryCredit: AFP

The West Ham icon raced to the 3,000 travelling supporters and emotionally kissed the badge, showing just how much it really means.

The home team felt the full brunt of their seething home supporters’ frustrations as they went in at half time to a cacophony of boos.

West Ham made them look like mugs and just seconds after the restart Antonio fizzed a low ball through the box but it was just out of Bowen’s reach.

But the winger was back with a bang to inflict the fatal blow on Lyon.

Bowen, who was in acres of space and released on goal by Fornals, broke free to the edge of the box, kept a cool head and slotted in.

Lyon had a string of chances late on but it really wasn’t their day.

A corner was flicked on and dropped at the feet of Bradley Barcola but his effort was wild and flew way over the bar.

And Tete should have been on target but poked his shot into the side-netting.

FORMER footballer Freddy Hall has been killed in a car crash aged 37. The Bermudan reportedly died in…
byBizLifetime
No comments

Meets the Wags of the Championship play-off final, including a vlogger, publicist and fashion stylist