RICHARLISON gave Everton a massive relegation lifeline with the vital winner against Chelsea.

But the Brazilian ace faces a potential three MATCH ban for his celebration.

Richarlison could get a three-game ban for throwing a flare into the standsCredit: Alamy

It means the Toffees are just two points adrift of safety with a game in hand over both Leeds and Burnley.

But the striker is in hot water with the FA after picking up a lit blue flare and throwing it back into the crowd.

FA beaks confirmed a probe was likely to be launched when they receive the reports if referee Kevin Friend and Prem match day delegates. 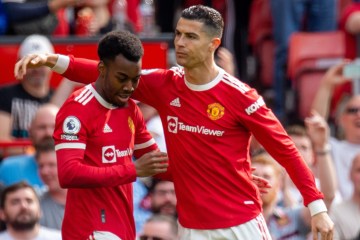 Wembley officials were alerted to the video evidence and a charge appears almost certain.

That could bring a three match ban, dealing a huge blow to Everton’s survival hopes.

But FA regulations over a “non-standard” incident mean punishment is unlikely to come in not effect for at least a fortnight.

And while the maximum penalty would be a three match suspension, Richarlison might escape with a fine and severe warning.

The FA’s next step is unlikely before Tuesday because of the Bank Holiday tomorrow.

An Everton club spokesperson said: “We will look into the matter but, as far we we are concerned, Richarlison was attempting to throw it out of the ground.”

In 2002, Liverpool defender Jamie Carragher was issued with a formal police warning after hurling a coin back into the crowd against Arsenal.

The FA also banned him for three matches while Liverpool fined him £40,000 after the incident at Highbury.

Earlier this year, the FA wrote to Liverpool’s Harvey Elliot after he was seen handling a flare after the Carabao Cup Final, which the Reds won on penalties.

JOSE MOURINHO is already calling the Europa Conference League his own. But the Roma coach, looking for major…
byBizLifetime
No comments