One of the most famously complex PC strategy games ever made makes the leap to consoles and works far better than you might imagine.

The world of PC gaming always tends to be viewed as intrinsically nerdier than consoles. Being a PC gamer means spending hours tinkering with electronics to build or upgrade your computer, as well as fiddling with settings and drivers to get games running on your particular hardware configuration. In return you get cheaper games, higher resolution graphics, insanely high quality monitors, and access to genres often denied to more casual players.

One of those is grand strategy games, which benefit both from the precision of keyboard and mouse, and the proximity of monitors, in order to navigate their fiendish complexity. The genre does occasionally make the leap to console though, such as with 2019’s Stellaris Console Edition and Civilization 6 – which even managed to work surprisingly well on Nintendo Switch.

Crusader Kings 3 is the latest example to make the jump to consoles and it’s a masterclass in information and control systemisation, elegantly sublimating the layers of menus necessary to fight, influence, and marry your way through labyrinthine dynastic politics. As with its PC-based older brother, you start with a single ruler, whether a king, queen or lowly duke and try to create a dynasty to last the ages.

The entire game takes place on a map of the world, which is made of colourful paper when fully zoomed out but closer up shows individual duchies, counties, and the countries they comprise. Typically beginning in 800-1100AD, you choose a starter noble with the sole task of building their family line’s power in an unstable and unpredictable world.

You need to start by taking stock of your character’s natural abilities, which are rolled fresh with each new game, making every playthrough different even when you start with the same person.

These abilities include Diplomacy, which influences others’ opinion of you and is incredibly useful no matter how you approach the game; Martial, which governs your skill at raising and commanding armies; Stewardship, your level of local control and authority to collect taxes; Intrigue, for how likely your plots are to come to fruition undetected; and Learning, which lets you wield religious beliefs and conduct tech research.

Each ruler also has a level of battle prowess, which comes into play if you get involved in a duel or serve as a knight for your liege (if you report to one), helping you survive battles and personal encounters. Once you’ve worked out where your strengths are likely to be, you can select one of five lifestyles, which unlock perks on their own discrete skill trees.

Finally, your guy or gal also has three personality traits, picked from the likes of calm, generous, fickle, and impatient. When you make decisions you’re always free to play against your character type but doing so accumulates stress, which eventually results in uncontrolled overacting to type – which may cause trouble depending on your protagonist’s key traits and the situation where they finally lose it.

These traits also govern how other people respond to you. Every character has an opinion of everyone else, represented by a positive or negative number. Managing opinions is essential to exerting influence and maintaining order in your kingdom or realm, which is done partly through direct rule and partly via vassals.

Every ruler has a maximum number of domains they can control directly. Expanding your kingdom beyond that number means conferring titles on your vassals, who can themselves have a layer of vassals below them. As well as extending your territorial dominance, they also let you raise larger armies and more taxes, increasing your power, wealth, and influence.

Expanding your territory isn’t as simple as just walking into someone else’s land and stealing it though – you have to justify your actions. Although holy war is an option, you can only use it once or twice per generation, making rightful ownership a key concept. If a duchy technically falls under your jurisdiction but is currently ruled by someone else, you’re more than justified in sending over an expeditionary force to exert your legal right and reclaim the territory.

Of course, you can also fabricate claims to neighbouring lands and march in to assert them as well. That takes time and money to cook up and is also risky if those lands happen to be under the claim of a king or queen with bigger armies than yours. It’s a useful way of growing your influence without having to wait to launch another holy war, as is pursuing the claims of your vassals’ extended titles, or indeed hooking in a new vassal, whose lands you quite fancy, and encouraging them to join your court.

The other way to nab extra duchies, or even whole countries, is to leverage hereditary entitlement. If you’re next in line to a throne or title, you could engineer an unfortunate ‘accident’ for the title holder or their children, to make sure those lands default to you. It’s not nice and it’s certainly underhanded, but such is the life of a feudal or tribal ruler in the early middle ages. It’s a dog eat dog world and the nastiest, hungriest dog wins.

Remarkably, doing all that works seamlessly with a controller. The left trigger brings up a radial menu for your current character, where the right opens one for the map. Navigating sub menus is just as elegantly handled, with frequently used tabs like military, council, and intrigue available instantly via menus at the top of the screen, accessed by tapping the bumpers. Information pop-ups are equally logical, creating a system that is as near to intuitive as you can get with a simulation this involved.

It’s fair to say, even with a lengthy and well designed tutorial, it takes several play throughs to start feeling confident with the game’s multitude of systems, options and nuances. Keeping track of the vast array of different gambits in play at any given moment takes practise and dedication, and easily the biggest hurdle for many players will be whether the phenomenal degree of choice, allied with virtually no action at all, is appealing or off-putting. 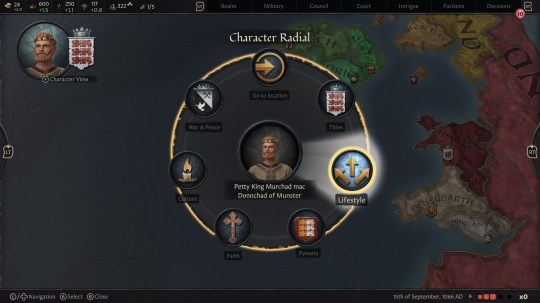 By this point you’ll know which camp you’re in, and you’ll be right. Anyone salivating at the thought of hours spent watching multi-generational plots work their way out through the decades and centuries, as their dynasty spreads across Europe or the Far East, will find the game’s console iteration perfectly supports those desires. There isn’t a final win condition, which will seem odd to some, but simply making the most of opportunities and tribulations provides its own intrinsic joy and challenge.

If, on the other hand, you just want to grab a sword or assault rifle yourself, no amount of control refinement is going to make this appealing. Crusader Kings 3 isn’t the sort of game that responds well to dabbling or casual engagement. You need to plough into it head-on to thrive on its spirit of intricacy, experimentation, and ultra-long term decision making, and its rewards take time and effort to reveal themselves.

Some of the fonts are still a bit small even if you’ve got a massive TV, but it’s a minor quibble when everything else works so perfectly. There’s not a bug in sight, and while graphically things are pretty static, and mostly text-based, everything works just as it should. It’s an amazing achievement given how much information you need to filter to stay on top of your dynastic responsibilities.

So, Crusader Kings 3 on consoles is a roaring success. Whether or not you want any part of that is down to your own gaming mores, and certainly most console players will not be used to games that look and play like this one. If you are interested though, it works extremely well with the controller and brings the complete grand strategy experience, in all its convoluted glory, to sofas everywhere.

In Short: Unleashing the full, terrifying complexity of a PC-based grand strategy game on console is a Herculean task, which Crusader Kings 3 manages with deftness and aplomb.

Pros: Enormously subtle multi-layered systems that all interact with each other beautifully. A genuine sense of the sweep of history, complete with its brutal indifference to your plans and schemes.

Cons: You need to put the hours in just to work out how to play, let alone become successful. There’s no way to ‘win’, which seems unnecessarily off-putting.

Rise, Tarnisheds! (pic: YouTube) The fan behind Sekiro’s co-op mod is also making one for Elden Ring and…
byBizLifetime
No comments

This bit of promo art is all you’re getting for now (pic: Activision) It doesn’t sound like fans…
byBizLifetime
No comments

Saints Row made me MORE excited for GTA 6

IT’S been almost ten years since GTA 5 launched and it’s still one of the best-selling games, week…
byBizLifetime
No comments

Be wary of spoilers (pic: CD Projekt) It’s all hands on deck for Cyberpunk 2077’s story DLC, but…
byBizLifetime
No comments