Demon Turf: Neon Splash – a sort-of sequel to one of the best 3D platformers of recent years (pic: Fabraz)

GameCentral speaks with developer Fabraz about their bitesize sequel to 3D platformer Demon Turf and why they chose to remove the game’s combat.

In the five months since indie 3D platformer Demon Turf launched, New York-based developer Fabraz has been quietly working on additional content, but not in the conventional sense. Demon Turf: Neon Splash, available now on Nintendo Switch and Steam, has the scope of DLC but is being sold as a budget, standalone title designed for both existing fans and newcomers. That’s not only business-savvy, but a move which has allowed the team to experiment with ideas old and new.

While anyone can jump into Demon Turf: Neon Splash, story-wise it’s angled as a continuation of the original, as Beebz and friends are sucked into a painting after beating the Demon King. There are 10 levels to complete in Neon Splash, along with remixed variations you unlock by collecting vinyls. Each level is aesthetically brighter and more vivid than before, helped by the fact Beebz’s movements now leave a trail of paint which colours the landscape even after you miss a jump for the umpteenth time.

Like the original, Demon Turf: Neon Splash is demanding but rarely punishing. There are mods you can activate for certain buffs, if frustration does kick in, while the manual checkpoint system allows you to set your own safety nets within each level. For Neon Splash, there’s greater leniency in that you can place an infinite amount of checkpoints, a design decision born from the idea that Neon Splash should streamline the game’s momentum.

‘I think overall people liked the checkpoint system [in Demon Turf] but it felt more natural in Neon Splash to make it infinite,’ says Fabian Rastorfer, founder of Fabraz. ‘We wanted to cut down the downtime of anything as much as possible. We really wanted this game to be about the speed and the flow – even in the level design. We tried to lean into that as much as we could.’

That principle ripples through the whole of Neon Splash’s design. A late-game glide ability from the original has morphed into a dash-like manoeuvre to quickly propel Beebz over chasms, instead of being just a slow descent. While there’s an expansive playground area to practise your platforming skills, the hub world has also been removed so you’re in and out of levels much faster than before.

Some alterations, however, while fitting the brief, were made in response to feedback on the original. The biggest is the removal of combat mechanics, widely considered the weakest aspect of Demon Turf. Each level in Neon Splash feels more interesting to replay as a result, as you’re no longer forced into battles which, for the most part, just slowed down the platforming rhythm.

‘It’s always that weird mix of euphoria and melancholy, like sending out your child into the world,’ Fabian said about the reaction to Demon Turf. ‘Overall, we were really, really happy with it. We just had so many players sending their own selfies from their own experiences with the game and incredibly heartfelt messages. But we were also sensitive to the things people didn’t like as much. And that also informed what we did with Neon Splash.

‘People absolutely adored the platforming and that’s obviously great because that’s the most important part, without a doubt. But we also noticed that, in general, a healthy amount of people didn’t vibe with the combat.

‘We still think it has some value. I think it brought in some interesting dynamics, I think it created boss fights which couldn’t have been done otherwise. It created some interesting puzzles as well. But we do understand where people are coming from; where it felt to them like a stop in their smooth movements through the world of platforming. You’re in the zone and you’re suddenly getting stopped and you have to do combat. So we decided for Neon Splash, there’s no combat anymore. We decided to really lean into this flow of just pure platforming goodness.’ 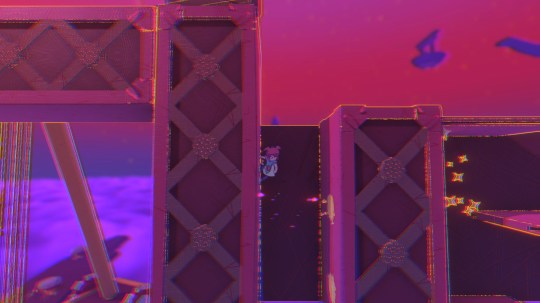 The emphasis on speed means levels are more linear than the original, which had some free-roaming worlds reminiscent of Super Mario 64. This change also meant the introduction of 2D sections, an idea originally cut from Demon Turf, could find a natural home in Neon Splash.

‘It was something we had already mapped out but cut for the main game as it didn’t fit with the general level design,’ Fabian said. ‘Demon Turf’s level design is an odd mix of linear and the explorative, and because of that explorative aspect, shoe-horning a 2D segment felt a bit forceful. It didn’t feel quite right. But in the levels of Neon Splash, they are focused more on the linearity, so there’s dedicated segments where we can put these 2D moments in – which felt right for us.

‘What was awesome, honestly, is that we had to do almost nothing except lock the camera and [place] entry and exit points. But otherwise all of the mechanics we created for Beebz translated pretty naturally into 2D, which was even a surprise to us.’

The lean nature of Demon Turf: Neon Splash feels like a pitch toward cultivating a bigger speedrunning presence. The original had online leaderboards and enough depth to facilitate impressive shortcuts, but the shorter length of Neon Splash – coupled with the lack of combat – is more approachable for repeat runs. In the first month, Fabraz are even holding a competition where the player who records and submits the best time will win $1,000 (£767).

PlayStation and Xbox versions of Demon Turf: Neon Splash will arrive down the line ‘if the demand is there’ but there are already plans in place for Beebz to return in a new instalment. ‘There’s definitely going to be more Demon Turf in the future,’ Fabian said. ‘We can’t let go of that world, we love it too much. You can definitely expect even more goodness with Beebz and the gang down the line, for sure.’

Fabian is coy about what form any future sequel will take though: ‘Probably the next thing we’ll do will not be like another Neon Splash, but it will be something else entirely again. Probably some other different experiment that we love trying out. Just working with what we’ve learnt and what people enjoy, and leaning into those aspects more and always kind of evolving into the next fun thing. We have so many stupid ideas that I’d love to try.’

Demon Turf: Neon Splash is available from today on Nintendo Switch and Steam for £4.49.

Sacrifice your gold to me (pic: Metro.co.uk/Asmongold/Blizzard) World Of Warcraft streamer, Asmongold, took to Twitch to show off…
byBizLifetime
No comments