How to beat Dragonlord Placidusax in Elden Ring

If you’re having trouble with one of Elden Ring’s toughest bosses, we’ll show you how to beat and ‘cheese’ Placidusax.

This optional boss in Elden Ring is hidden out the way and with good reason – it’s notoriously tough. FromSoftware’s latest action role-player will often feel like you’re scraping through by the skin of your teeth, and in this case you will be.

Placidusax is optional, so you don’t need to take them on unless you really want to. With the devastating attacks that spread across a wide area, you’ll want to be very comfortable with the dodge button, and ready for a lot of deaths.

To begin this boss fight, you’ll first need to head to the Crumbling Farum Azula. Once you’ve fought your way to the centre, you’ll want to find the site of grace called ‘Beside the Great Bridge’ to ensure you have an easier time getting back to the fight if you die.

Where to find Dragonlord Placidusax in Elden Ring

Once you’ve rested and levelled up, head backwards to the big lift behind you and ride it down. Go forward into the room dead ahead and then take a left, you’ll see a corridor in front of you to follow.

This corridor and exit is inhabited by a few enemies but if you begin sprinting through as you hear them, you should be able to avoid them entirely.

Keep heading straight until you see an exit outside that leads to a cliff face. You’re going to go against your instincts and drop off the cliff, onto the ledges below.

As you hit the first ledge, you’re going to see a crescent shaped platform near the spinning tornado. Yes, you’re going to go to that. Keep dropping down, careful not to slip off the edge and you’ll reach it.

Once you’ve reached it, run forward into the shallow pit and hit ‘Y’ or ‘triangle’ to lie down and be transported to the boss. 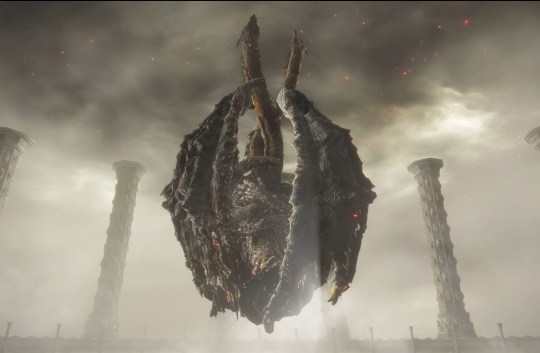 Be careful before you wake him up! (pic: YouTube)

No matter the build you’ve gone for, you’re going to need to be in range to strike it. Whether that’s with arrows, magic or your melee weapon, Placidusax is surprisingly easier to deal with up close than from afar.

Lightning will begin to strike in designated spots, highlighted red, which you can dodge through. Placidusax will also cause lightning bolts to spawn directly around them, forcing you to dodge before they hit you.

Other moves they’ll do in this phase are to swipe with their wing if you’re standing too close for too long and breathe fire that will deal a high amount of damage.

They might also try to hit you with a lightning claw and follow it up with a smash onto the ground, generating another lightning wave.

For this phase we recommend you attempt to stay at their side, watching for any sudden movements that could crush you. If this happens, you’ll be helpless while your character picks themselves off the ground.

At the start of phase two, roughly when you get their health down to halfway, they’ll disappear. As they begin to reappear, a cloud will also appear indicating where they’ll come from. Roll into this as you see it, using the invincibility you get from dodging to protect you.

After this move, they’ll begin shifting in and out of existence. You’ll see them begin to materialise, but it’s a very quick animation. Spin your camera around and watch for the area as they will suddenly appear without much warning.

As they phase back in and strike you, roll into them like before to get in a couple swipes before they disappear again.

If you’re a magic user, keep your distance and preemptively charge up any spells so you’re not having to wait around.

Keep chipping away at its health and once it begins to fly away again, it’ll begin repeating the start of the second phase and enter its third phase of attack. Rinse and repeat, but make sure you’re dodging multiple times, as the difference here is that it’ll swing multiple times or as it gets more hurt, hurl laser beams at you.

Keep close and use patience to be rewarded with the Remembrance of the Dragonlord.

What does the Remembrance of the Dragonlord do?

Trading in the Remembrance will reward you with either 30,000 runes or you can swap it for one of two weapons with Enia.

Your two options are Placidusax’s Ruin, which transforms you into the Dragonlord to briefly rain down the hell you just endured on the unsuspecting creatures of the world or you can acquire the Dragon King’s Cragblade, a sword which deals additional damage to dragons (15% to ancient dragons and 30% to regular dragons).

It also comes with the Thundercloud Form skill, which will turn you into one of the menacing clouds from the boss fight to unleash damage on enemies.

So if you’re struggling to beat this boss, you can enter the arena and up to a certain point, Placidusax won’t wake up. This will allow you to equip the Serpent Bow with Serpent Arrows, dealing poison damage.

The Serpent Bow can be found in the Abandoned Cave.

Keep hurling arrows until the dragon is poisoned, wait for it to wear off, and then repeat until it falls.

If your arrows aren’t reaching, you can use the Mighty Shot skill to ensure they reach or keep stepping forward very slowly so as to not wake up the dragon.

This method should also work pretty well if you’re quick on the trigger and want to fight the Dragonlord head-on.

Just bear in mind that this method will take a long time to work, as you’re only slowly chipping away at the monster’s health.

Lila’s Sky Ark is a puzzle-adventure game for the Nintendo Switch. If you like your gaming a little…
byBizLifetime
No comments

Assassin’s Creed Mirage does not have actual gambling assures Ubisoft

Fans are ecstatic for her return (pic: Twitter) It’s only been a month and Twitch’s Pokimane is ready…
byBizLifetime
No comments