Lego Star Wars: The Skywalker Saga – Rey starts off a scavenger but ends up a Jedi (pic: WB Games)

The new Lego Star Wars game has over 300 characters but only a very few are classed as scavengers, which can make them difficult to unlock.

For the first time in a surprisingly long while there’s a new Lego movie game out and it’s a giant-sized recreation of the entire nine movie Star Wars saga. All the levels and gameplay are brand new, and so are the graphics and new class-based system for the characters.

All the various different characters are split up into different groups, from Jedi and Sith to scavengers and protocol droids. Each have their own specific abilities, from using the Force to translating alien languages, so it’s important to know who can do what.

While some are obvious, including Jedi with the Force and astromech droids like R2-D2 who can hack terminals, some are less so, like the new scavenger class.

What is the scavenger ability?

The scavenger ability is limited to a fairly select group of characters, including Rey from The Force Awakens, a Tusken Raider, and a variety of ewoks from Return of the Jedi.

These characters have three different items they can use: a glider to briefly take to the air, a breaker blaster gun to knock down blue shining walls, and a net launcher to attach to walls so you can climb up them.

It’s the developer’s way of mixing things up with characters that might not be traditionally very exciting. The ewoks might not seem that useful normally, but as a scavenger they definitely are.

How to unlock scavenger abilities?

The quickest way to get a scavenger character is to start playing Episode VII, The Force Awakens because Rey is in it from the start. (The ewoks don’t appear until Return of the Jedi, so you have to play through both a New Hope and The Empire Strikes Back to get to them.)

Playing the story missions as Rey you’ll actually see her find the blueprints for the three pieces of equipment, although all the scavengers start with each item automatically. Later iterations of Rey, from Episodes VIII and IX, won’t have the scavenger abilities, though, as she switches class to Jedi.

To select a scavenger character push up on the D-pad to get to the character selection screen and if there’s not one in your quick select bar (use left and right to check) press down and then go through the different classes until you get to scavenger – it’s the third one down, underneath Hero.

Which characters can use Scavenger abilities?

By heading into the menu to see all your unlocked classes, you’ll be able to get a clear idea of who can use what if you ever forget.

If you want to use Kuiil, The Mandalorian’s ugnaught friend, you’ll need to purchase the season pass for the downloadable content. 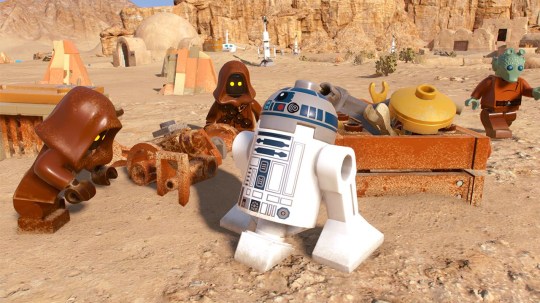 The jawa is surprisingly difficult to unlock (pic: WB Games)

How to unlock Jawa in The Skywalker Saga

The only unusually difficult character to unlock is the jawa, as you’ll need to beat the following quests to unlock the little critter:

Aside from Dodginess Manifest, which is on Jakku, you’ll be able to find all the other quests on Tatooine in the Jundland Wastes. A lot of them don’t open up until after you beat Revenge of the Sith though.

How to use Scavenger abilities

To use the Scavenger abilities after unlocking them, you’ll need to press and hold the ‘B’ button on Xbox, ‘circle’ on PlayStation, and ‘A’ on Switch while in control of a scavenger.

Doing so will pop up a little menu for you to choose which ability you’d like to use and then you’re free to cause havoc or grab as many hidden Kyber bricks hidden around the different zones.

Table of Contents Hide What is a Minecraft snapshot?What is the Minecraft warden?How to get snapshot builds of…
byBizLifetime
No comments

Terminator getting open world survival game – but not any time soon

Fingers crossed it’s an improvement over Nacon’s last Terminator game (pic: Nacon) With any luck, our own machine…
byBizLifetime
No comments