Retailer Simply Games back to normal with no explanation

Remember how Simply Games went dead silent back in February, cancelling pre-orders, and generally coming across as if it was shutting down? Turns out everything’s hunky-dory because the website is up and running again.

The UK retailer’s website went down not long after the launch of Elden Ring. Head to it now, however, and it’s like nothing has changed, with everything appearing to operate normally.

So, what happened to the website? Your guess is as good as ours, as its return wasn’t even advertised by Simply Games. It has not given any explanation for it nor why it went down in the first place.

There is no message to be found on the website about the last few months and the Twitter account still hasn’t been updated since February. The last thing it posted was an announcement that Elden Ring pre-orders were available.

Around the same time, it told confused customers the same stock answer of ‘We are currently implementing changes to our internal systems and reviewing our pre-order process which is why we only have a limited display of products at the current time. This should be completed within the coming weeks and new titles will then be added to the website.’

This doesn’t really explain why the entire website vanished. It’s bizarre that, for one of the country’s most popular independent gaming retailers, it has made no effort to keep customers updated.

VGC has done a little more digging and discovered that there have been recent changes at Simply Games’ parent company, Boss Developments Limited. As listed on the Companies House agency’s website, its registered office address was changed from Northamptonshire to Wellingborough on March 16.

On that same day, Neil Muspratt, who is described as a ‘person with significant control,’ resigned as director, with one Daniel Whitehead joining as commercial director.

It’s reasonable to assume that these behind the scenes changes played a part in Simply Games’ temporary absence, but, again, there has been no official statement from anyone involved with the website. 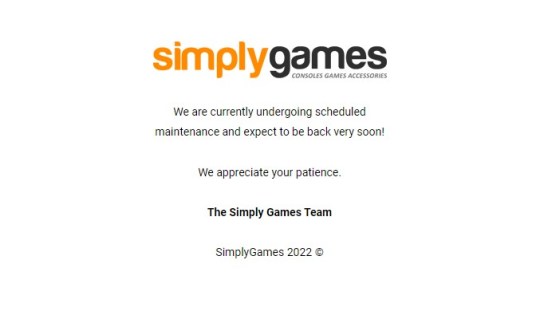 Starfield – were you impressed? (pic: Microsoft) The Monday letters page prepares to take out a mortgage on…
byBizLifetime
No comments

Elden Ring: how to beat Godrick the Grafted

Sony wants PS VR 2 to be a hit from the start (pic: Sony) Sony is confident of…
byBizLifetime
No comments

Trainwreck back in hot water again (pic: Metro.co.uk) Twitch streamer Trainwreck has hit out at critics of his…
byBizLifetime
No comments