Rick Sanchez joins MultiVersus: How to play his moves and what’s new?

MultiVersus 1.03 update brings megagenius Rick Sanchez to the table – but will he manage to rickety-rickety-wreck his foes?

The long-awaited grandpa and grandson reunion is finally happening in MultiVersus, as Rick Sanchez has been revealed to be the latest fighter to join the game – only a month after Morty Smith.

Apart from the Rick and Morty universe, the game has also drawn inspiration from other animated series, such as Adventure Time, Steven Universe and older classics such as the Looney Tunes and Scooby-Doo. Though Velma did almost get cancelled by fans for being too much of a Karen.

If Velma managed to become a controversial character, we can’t imagine what might happen to Rick, as from his blaster to his Meeseeks boxes, there’s plenty of references from the show hitting MultiVersus.

When will Rick Sanchez join MultiVersus?

After countless rumours and teasers, Rick Sanchez finally joins the game on September 27, 2022, as a mage fighter, through MultiVersus 1.03 update.

Not long-ago Gizmo from Gremlins joined the game as a support character, so if you prefer more proactive fighters now’s your chance to jump back into the game. Though developer Player First Games warned fans that Rick will be one of the toughest characters to master in the game.

As for how much he costs, Morty’s grandad is an Expert character, priced at 3,000 gold coins.

What are Rick Sanchez’s moves in MultiVersus?

As a mage character, Rick won’t even have to get his hands dirty, as he’ll be able to pack a punch from a distance, through his high-tech abilities. Like all fighters, he also has three moves, in this case: Yeah, Fart Bomb!, Meesek and Destroy, and Basrick Portal Theory.

An extra classification has also been added to the MultiVersus projectile system, with Rick’s uncharged blaster currently listed as the only Light Projectile.

Rick is the personification of work smart not hard, and that’s what he intends to use his Meeseeks box for. His ability Meeseek and Destroy summons a Meeseeks that performs one of three attacks: running forward, throwing an uppercut or pulling out a golf club.

This ability makes Rick more complex to master, compared to fighters with more straightforward fighting styles, as you’ll have to evaluate which one of Meeseeks moves to play in various scenarios. After all, Meeseeks are simply artificial humanoids… who are created to serve a sole purpose for which they will go to any length to fulfil.

On the other hand, Yeah, Fart Bomb! is what it sounds like: a fart bomb hitting enemies upwards. This ability will likely come in handy when trying to get Ringouts – such as Sun Scream from the Rick and Morty-verse – from the top of the map.

Rick’s Basrick Portal Theory allows him to aim and summon a max of two portals, which could turn out similar to Bugs Bunny’s ability Bunny Burrow – creating a tunnel to allow teammates and projectiles to pass through.

Besides Rick, Bugs Bunny and Tom & Jerry are the other mage characters available in MultiVersus.

What changes with the MultiVersus 1.03 update?

The MultiVersus 1.03 update is another jam-packed patch, which also brought major changes to 15 existing characters, apart from introducing Rick Sanchez to the game. The update looks to bring balance to MultiVersus, both through character nerfs and buffs and general quality-of-life bug fixes.

Speaking of buffs, three characters seem to benefit the most this time around: Garnet, Steven Universe and Gizmo. The latter was just added to the game a few weeks ago, becoming the first fighter from the Gremlins universe.

All three saw changes to their air attacks and specials, with Gizmo also getting a buff to his jump speed to allow for quicker and smoother movement. 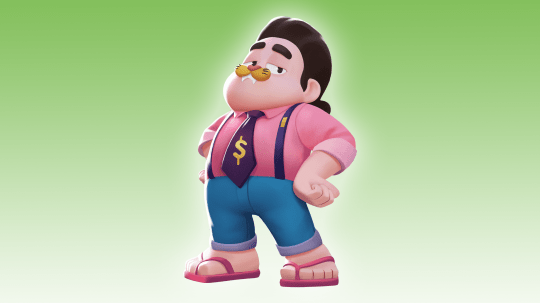 Steven Universe is tapping into his pro-wrestler persona (pic: MultiVersus)

On the contrary, Jake, Superman, Velma, and Shaggy were among those who were hit with less-favourable tweaks. For the most part, their recovery times were increased for certain moves and key attacks are not as OP as they used to be, as they no longer break enemies’ armour on single hits.

The patch notes also revealed that Shaggy will be free for all players starting with this update, replacing Wonder Woman as the free tutorial character. Wonder Woman can now be purchased for Gold or Gleamium.

Developers are looking to bring a global soft-cap on infinite combos and push players to explore alternative combo routes, through a new anti-infinite-combo system. This means that if the same attack has been used four or more times in the same true combo, all subsequent attacks will be decayed.

In a bid to make mastering characters ‘a bit more of a journey’, now you’ll need to gather double the XP to level up between levels three and 15 on the mastery track.

All of these updates, along with new skins like Tiger Millionaire Steven are coming to MultiVersus alongside Rick Sanchez on September 27.

To submit Inbox letters and Reader’s Features more easily, without the need to send an email, just use our Submit Stuff page here.

It’s time to reveal the latest games to hit the Nintendo Switch! If you’ve been enjoying the new…
byBizLifetime
No comments

Note the PAL logo from the original box cover (pic: Sony) PS Plus Premium is now live in…
byBizLifetime
No comments

From axes to whips (pic: Metro) With development on God Of War Ragnarök done and dusted, its director…
byBizLifetime
No comments

POKÉMON fans were excited to finally get their hands on the Scarlet and Violet games, but the launch…
byBizLifetime
No comments